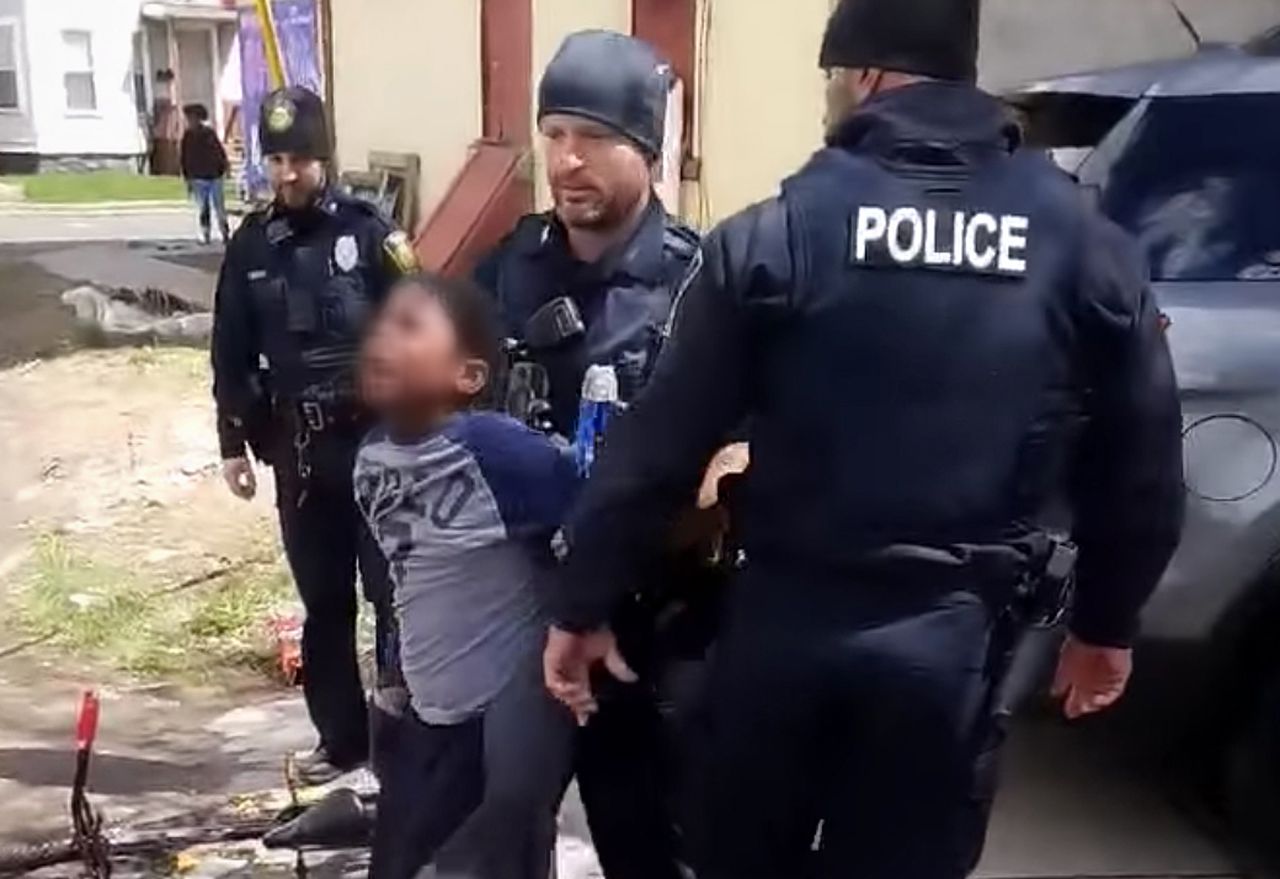 Syracuse, NY – Anthony Weah was out on an errand Sunday when he got a call from Syracuse police.

Officers were at his home with his three sons. The boys were charged with stealing crisps from a store, he said.

Weah went home. The officers were friendly at home and did not press charges or charge tokens, Weah said.

Later, Weah saw what thousands saw: a video of her 8-year-old son sobbing and being put in a police cruiser because of that same bag of Doritos.

In the video, seen by nearly 2,000 people on Facebook and 1.3 million on Twitter, a Syracuse police officer holds the boy from behind and walks him to a marked police vehicle. Bystanders, including the man who recorded the incident, shout at the police to let the child go.

“Why would the police treat this child like this?” Weah asked, who said he wanted to press charges against the police. “More than a $3 bag of chips.”

The boy was never handcuffed, according to Syracuse police. He came home with no marks on him, his father said later.

But by Tuesday afternoon, thousands of people on social media were weighing in. They included Buffalo Bills Hall of Famer Thurmann Thomas and former Syracuse University basketball player and social commentator Etan Thomas.

On Twitter, there was widespread condemnation of the police. People saw the police response as a massive overreaction to a minor offence, an example of conflict escalation. The fact that the three cops were white and the child black has led commentators to link it to a history of racial injustice in urban policing in Syracuse and across the country.

One said, “Well, why don’t black people trust the police?”

Weah, who is from Ethiopia, admits what her son did was wrong. But he also takes issue with how officers handled the incident, which is currently being investigated by the police department.

“The policeman is not children,” Weah said. “They’re not boys, they’re men.”

Weah said he was grateful to Kenneth Jackson for being there. Jackson, 37, was out shopping on Sunday when he saw police pull someone off a bicycle. Jackson stopped and started recording.

“He was defending them,” Weah said.

At first, Jackson said he didn’t realize he was a child.

“He got ripped off that bike. The bike hit the ground and the chips went everywhere,” Jackson said.

Jackson asked what the police were doing. “You can guess what I’m doing,” replied the officer holding the boy.

Another officer told Jackson the boy had stolen. What didn’t make sense to Jackson, he said, was the officers’ response.

“It was just beyond me that they actually treat this baby like that,” he said.

The scene quickly became tense. The boy moaned. Another boy said “it wasn’t him”.

And the adults — the officers and Jackson — started yelling at each other. Jackson asked the police if they knew the parents and he offered to pay the tokens.

An officer recounted recent shoplifting and vandalism in the area. Another asked Jackson if he would like to drive around town to pay for things being taken.

Jackson said the incident could have been traumatic for the boy.

“There are other ways to rectify this besides scare tactics,” he said. “Now it’s just another youngster being scarred by the system.”

Growing outrage online led city police to issue a statement on Facebook today, two days after the incident. In two hours, there were nearly 1,000 comments, including support for the cops and criticism from passers-by, but others like this:

“How are we supposed to back and support the blues when they can’t even reasonably handle a situation with a child?” Others commented on the increase in criminal incidents.

The incident, including the officers’ actions, and video from body-worn cameras are being reviewed, according to police spokesman Lt. Matthew Malinowski.