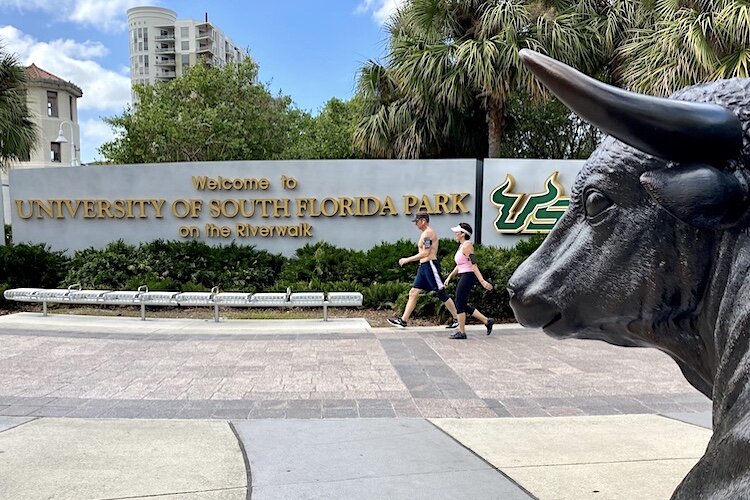 Since opening to the public in 1989 – replacing what were once vacant lots filled with homeless encampments and a few dilapidated buildings – the Tampa Riverwalk has become an increasingly popular place for walking, running and other outdoor recreation.

Soon, the existing 2.6-mile Riverwalk that winds along the east side of the Hillsborough River in downtown Tampa will have approximately 3.5 additional miles added on the west side for people and pets to stroll.

Over the next four years, plans call for an additional “West River District Building Grant Project” to connect West Tampa and downtown neighborhoods and expand the current walking bicycle network.

Work on the “West Riverwalk” or the “West River project” is just beginning. The new concrete sidewalk will run parallel to the existing one on the east side of the river. It will run from Platt Street near Bayshore Boulevard Publix in Hyde Park north to near the bar, restaurant and marina at Rick’s on the River off Columbus Avenue.

And that’s great news for Tampa residents like Brian Taylor, who says he enjoys bike rides or almost daily walks on the current Riverwalk and uses it to commute to events across Tampa multiple times. per month. The 53-year-old artist and art teacher moved to Tampa in 1975 and has lived in Ybor City since 2003; he says the expansion will garner more positive recognition for the city’s livability factor.

“I consider the expansion of the Riverwalk extremely important to realizing the full potential of what it offers Tampa residents and visitors,” he says. “It’s because of the development of Riverwalk that we now see it as a major artery that connects neighborhoods and a reason for people to get out and enjoy the best that Tampa has to offer.”

According to Brandie Miklus, infrastructure and mobility program coordinator for the city of Tampa, the main reason for the expansion is safety. The total 6.1 miles of the project will be accessible to pedestrians and bicycles, separated from vehicle traffic.

Overall, the project is more than the expansion of the Riverwalk on the west side of the river. Miklus says it also includes on-road improvements such as protected cycle lanes and improved pedestrian crossings. The aim is to provide safer ways to get around the west side of the Hillsborough River, connect local neighborhoods and expand the walk-cycle network.

To fund the project, the city was able to secure a $24 million federal grant from the Federal Highway Administration in late 2020 through its discretionary grant program: Better Utilizing Investments to Leverage Development (BUILD) Transportation Discretionary Grants, now known as Rebuilding American Infrastructure with Sustainability and Equity (RAISE). The project will cost about $30 million in total with additional funding coming from the City of Tampa, so it’s about 80% federally funded and 20% local government funded.

“The city plans to announce the project this summer to recruit a design-build contractor,” says Miklus, who has worked for the city since 2020. “Once a contractor has 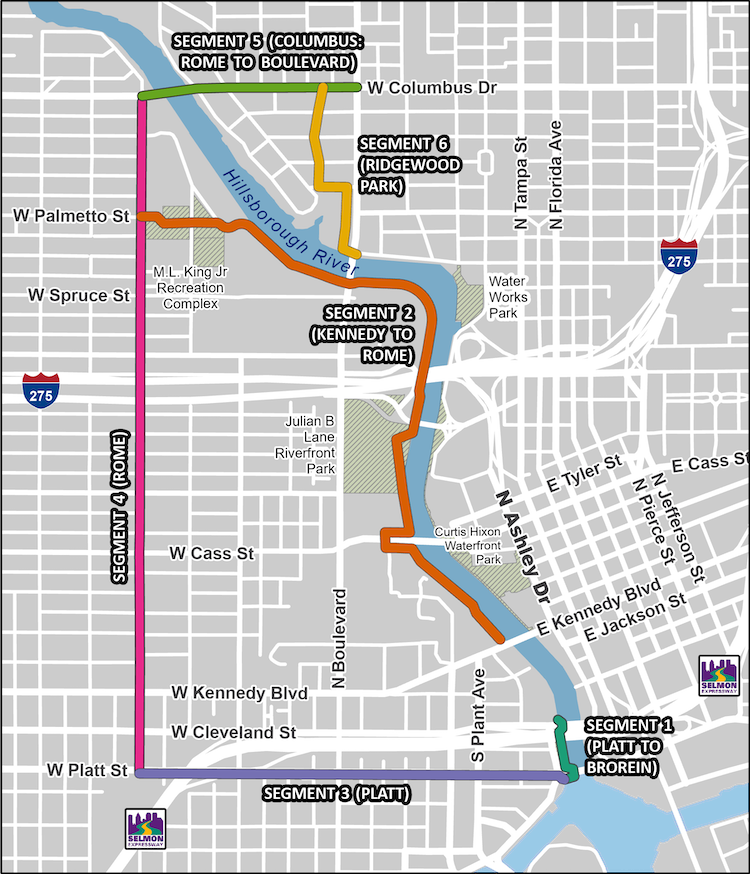 been selected, project design will commence in 2023 with substantial completion by December 2026.”

The newer part of the Riverwalk – separated from vehicular traffic – will be a more utilitarian avenue, rather than focusing on recreation and entertainment. It will be a transformative addition to the existing Riverwalk that will help bring neighborhoods on the west side of the river together and connect them to the ongoing residential, commercial and entertainment growth in downtown Tampa.

This connection through the West River project will run north to Columbus Drive and border Rome Avenue to the west and will likely benefit residents of some of the region’s changing neighborhoods, Miklus says.

Some of the neighborhoods that will be connected to downtown through the West River project include: West Tampa, Tampa Heights, Bayshore Boulevard, Hyde Park, North Hyde Park, Riverside Heights, Bowman Heights, Ridgewood Park and Ybor City with paths and streets multimodal.

Already in the past 10 years, apartments and condominiums have been built west of the city center, as well as shops, new restaurants and an urban grocery store.

Among the expansion benefits of the West River Project, according to the City of Tampa, will include:

According to the city, the timeline for completion of the West Riverwalk is tentatively to have the BUILD grant agreement approved by city council in April, have the design-build project announced over the summer, and sign off. the design-build contract in early 2023. From there, completion of the design phase is expected to be in the spring of 2024 and the construction phase largely complete by December 2026.

“It’s about having more secure connections. It’s more than just an expansion on the west side of the river. It’s about connecting neighborhoods and that’s what excites us the most,” says Miklos. “It’s kind of hard to imagine Tampa without The Riverwalk. This project will be a vital link connecting the neighborhoods, downtown, to other neighborhoods on either side of the freeway (I-275). It’s just a great example of how Tampa makes big city moves.