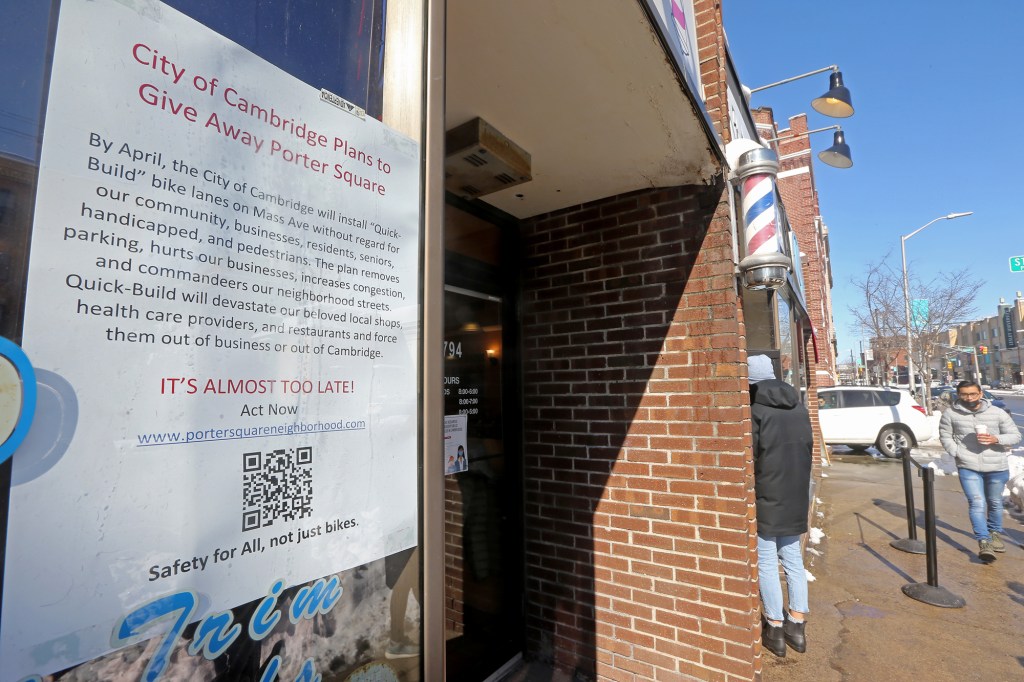 A Cambridge plan to install cycle lanes in April along a small strip of one of the city’s main thoroughfares, eliminating most metered parking spaces in the process, has sparked tensions between landlords city ​​businesses, bikers, local officials and concerned citizens around Porter Square who all have a stake in the game.

The business community banded together, forming a group to sign petitions, distribute flyers around the neighborhood, and generally rally against the project.

“We’ve been here 34 years, I’ve probably been told over 1,000 times, ‘I found a parking space, so we stopped,'” said Seth Lamoreaux, owner of Cambridge Clogs, a store specializing in socks and clogs. He added that some customers come to his store from other parts of New England and definitely need parking.

Lamoreaux said the day before a customer told him he was refusing to shop at his store because he had a sign supporting the small business movement against bike lanes in his window.

“A lot of people are entrenched in their position, and I would like to see a compromise,” he said.

“A big part of the Cambridge community, we all cluster together because one neighborhood or stretch of street affects the other,” said Amy Driscoll, owner of Susanna, a shop just outside the piste area. cycle paths. “This bike path project looks very threatening.”

“We’ve come out of a pandemic, and removing the company’s products from the bike lane is our lifeline,” said Faron Fares, owner of Faron Salon. “Everyone is very nervous and very scared, so this will be the second pandemic for us.”

But the tension is a two-way street, said one resident, with campaigners adding that the cycle lanes could create crucial change for the region and help businesses.

“I had a business owner yell at me just for walking in with a bike helmet,” said a local resident who identified herself as Katherine B. “It’s so hurtful and painful that I just have to take a step back (organize) for my own sanity.

Throughout the year, Katherine regularly cycles the streets near this area with her three children in tow, dropping them off at daycare and getting to and from work. She was previously more deeply involved with a group of cyclists organized to rally behind the project, but also cited the example of a man supporting $700 damage when someone placed thumbtacks and bricks in a newly installed stretch of cycle path in North Cambridge.

She continues to take interest in the issue by emailing members of the city council, as she feels the drive along Mass. near Porter Square is too dangerous for her to ride with her children, especially since her 6-year-old son rides a bike alongside her.

“It’s a shame, as he’s getting old enough to go to high school, he can’t cycle there because there are no safe routes,” she said. “It’s such a shame for children in urban areas that they don’t have this kind of infrastructure to allow them to have the independence and the freedom to go to their football match or go visit their friends. .”

The cycling community believes that the project, which for now involves only a quarter mile of Mass. Ave. immediately adjacent to the Porter Square T stop, was hyped by the business community, who rallied to stop the project and save their parking lot. The project will eventually include the construction of protected cycle paths on many of the main streets of Cambridgeand all Mass. Ave.

“We hear from business owners who are panicking about losing their parking space, but their business is not in the study area,” said Nate Fillmore, founder of Cambridge Bike Safety. “If the parking lot is lost in front of the business, it’s certainly not happening imminently. There will be a lot of discussion about exactly where the parking is going and what the options are,” he said.

He added that advocates like him have been calling for more cycle lanes in Cambridge for years, particularly following at least two fatal cycling accidents in the city, one at the intersection of interest.

“Cyclists depend on the small business community more than anyone,” he said. “We want to find solutions that work for everyone, and would like to break down all the tenor of the conversation, and most importantly, just have a factual conversation about what’s really going on, and how can we deal with the impacts that may occur?”

Kristiana Lachiusa, director of Transit + Outreach for LivableStreets Alliance and a Porter-area resident, noted that the issue is broader than businesses over bikes, as the corridor “really doesn’t work well for anyone,” she said. she declared.

“There’s traffic, the buses are slow, it’s dangerous and uncomfortable to ride a bike, it’s difficult to cross the street,” she said. “We know today is not the situation we want it to be.”