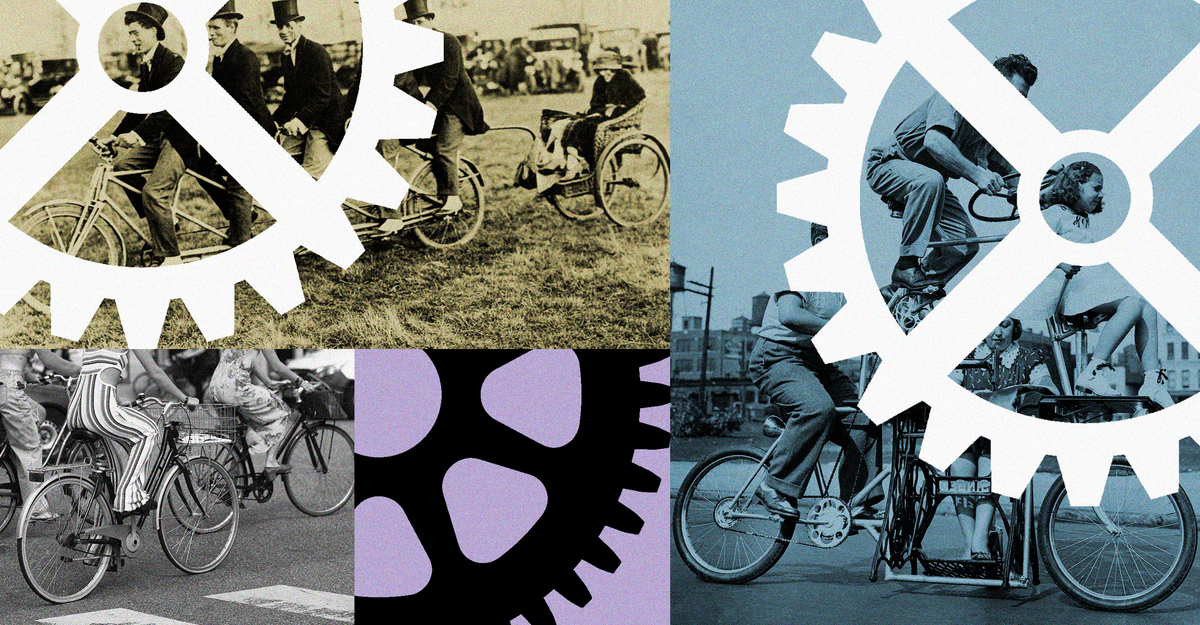 In the late 2000s, Williamsburg, Brooklyn was the coolest neighborhood in the world. And if the lifestyle blogs were to be believed, everyone in Williamsburg rode bikes. But not everyone in New York did, and then-Mayor Michael Bloomberg wanted to change that. He installed hundreds of miles of bike lanes throughout the city, which had the potential to reduce both pollution and road deaths.

In the Hasidic section of South Williamsburg, the Department of Transportation striped a white hallway along a particularly chaotic section of Bedford Avenue, which is home to kosher grocery stores and Hasidic apartment buildings. The locals, already wary of outsiders, were furious. For them, bicycles were not symbols of hip urbanism but of unwelcome intrusion, especially by female cyclists whose clothing offended the community’s religious mandate of strict modesty.

Prior to Bloomberg’s re-election, the city removed the bike path. A few nights later, the Hasidic community patrol found renegade cyclists repainting it at 3:30 a.m. The city also got rid of the DIY lane, leaving the two sides to debate for months, but the lane never reappeared. Cyclists still ride this stretch, finding their own way through tightly packed vehicles. The Hasidim always seem to resent cyclists. The conflict escalates.

Read: The design bible that changed the way Americans cycle in cities

Swap 1890 for 2009, or London for New York, and this episode feels like any other in the endless drama between cyclists and the people who reluctantly live alongside them. Since their debut in the 1800s, bicycles have been a confusing presence on the streets, the unpredictable fairings of their riders infuriating carriage drivers, then motorists and, all the time, pedestrians. For just as long, many cyclists have firmly retained a sense of moral superiority over their machines. As climate collapse looms, bicycles have taken on a holy quality, touted as impeccable instruments of penance for the carbon emissions of rich countries.

Or at least that’s the story many of us, especially in the North, tell ourselves about bikes. What is missing could fill a book, which Jody Rosen, a New York Times Review lifelong contributor and cyclist, wrote. Two Wheels Well: The History and Mystery of the Bicycle takes readers on a journey through time and the world to build an alternate narrative about a simple machine that becomes harder to categorize as you learn more about it. Throughout history and across cultures, the bicycle has been a human denominator. Their past and their future concern us all, even if you think they have nothing to do with you.

The first bicycle-like machine emerged in 1817 from the workshop of German inventor Baron Karl von Drais. His Laufmaschine (“running machine”) was essentially a balance bike – two wheels connected by a seat, which the rider pushed forward with their feet. It took until the turn of the century for the bicycle to evolve into what we ride today: two equal-sized wheels connected by a frame and powered by a pedal drivetrain. This iteration of the bike really took off, transforming the machine from a reviled toy of the idle rich into a menacing equalizer of class and gender. (Susan B. Anthony said in 1896 that cycling did “more to emancipate women than anything else in the world.”)

Rosen covers that first story because he has to, but immediately starts mining it for nuance. “The bike is a populist project, the result of grassroots innovation and an exchange of knowledge that goes in all directions,” he writes, acknowledging that enthusiasts modernized its design almost from the start. It connects these amateur engineers both to the Vietnamese guerrilla fighters who packed anti-French, then anti-American, bombs into their frames, and to the American “freak bike” clubs who weld together bizarre and endearing contraptions that are nearly impossible to drive. Even when a little exaggerated, these historical and global parallels, which Rosen draws throughout the book, separate bikes from the ownership of one time or one type of person.

Having the motivation to write so much about bikes requires loving them, which Rosen does deeply. After a childhood spent admiring bicycle design, he fell in love with riding as a courier in Boston while in college (“I’ve certainly never had a nicer job,” he says), an experience that has makes him a lifelong enthusiast but not a pedant. reducer. Even after decades of cycling, he views it with a fresh mind, still amazed by the sheer joy of the experience. In the passages where he describes what is really feels like to climb, it makes it irresistible:

[On] particularly smooth driving, [your] the body and the being – shoulders, hands, hips, legs, bones, muscles, skin, brain – seem inseparable from the strong but flexible frame of the bicycle. At times like these, designing the bike as a vehicle might not be quite right. It might be more accurate to consider it as a prosthesis. Ideally, it’s hard to tell exactly where the rider ends and the bike begins.

His enthusiasm sometimes overflows. Fascinating snippets organized by loose themes, abrupt topical changes in sections, and chapters on cycling, exercise bikes, and bicycles as sex objects make the book comprehensive but also hazy. Yet the meandering structure often feels like a leisurely stroll, full of spontaneous detours to unexpected pleasure.

But what makes the book essential is its rigorous report. Rosen holds his responsibility as a journalist above his love for his subject, sharing unflattering and sometimes dark truths about the bikes that rust their shiny image. Like the lithium that powers the batteries of electric cars (and e-bikes), the materials the bikes are made from are steeped in the blood of the Global South. The rubber for the first bicycle tires was harvested in the late 1800s by laborers in Portuguese Brazil and others in the Belgian Congo, whom the colonizers mutilated or murdered by the millions. The asphalt that first paved major American and European cities around the same time (it was cyclists who first succeeded in demanding smoothed streets) came from Pitch Lake in Trinidad, then owned by American business interests in contract with Imperial Britain, and later operated primarily for foreign benefit although owned by the state; Trinidadians still saw almost none of the benefits after more than a century of their work.

Bicycles can also themselves be a vehicle for colonialism. Klondike bicycles, designed (albeit poorly) to navigate unpaved terrain in cold weather, helped gold diggers of the 1890s in Canada explore deeper into lands that had long belonged to Indigenous communities. Bike lanes like those that plagued Hasidim are also, in historically black and Latino neighborhoods across the United States, harbingers of displacement. Rosen doesn’t struggle with these stories so much as he enumerates them in prickly intertwining, urging readers to set aside any assumptions they might have had about bikes before picking up the book.

To prove both the flexibility and unwavering functional value of bicycles, Rosen looks, near the end of the book, to the adjacent machines: the tricycles ridden by the poor of Dhaka. rickshawsand e-bikes that most New York immigrants delivery men use to drop off takeaway meals. Both types of work are grueling and exploitative, and the people who do them face government bans on the tools of their livelihoods. But as police and bureaucrats in these cities and many others have had to accept, there is no elimination of bicycles, or the various forms of transportation that come with them. Their promise of some kind of freedom, whether personal or economic, is too great to take away.

Read: I risk my life to bring you ramen

This is true whether you ride for work, pleasure or just transportation. In the world rickshaws and delivery men use their modified bikes to navigate an economy that marginalizes them, so they probably don’t romanticize their rides the way enthusiasts like Rosen (or me) do. But everyone who rides a bike does it because that’s how you get to where you’re going, most of the time on your own terms, which no other form of transportation allows in the same way. The history of the bike may be complicated, but the reason it’s such a long story isn’t. Everyone appreciates a hint of self-determination.

Amid the Hasid-hipster uproar, a self-proclaimed peacemaker named Baruch Herzfeld, a Modern Orthodox Jew in his 30s who ran a bike shop on the outskirts of the neighborhood, repeatedly tried to get the two to talk. parts. In 2010, he tells Atlantic that the outsiders had missed an important context for the controversy: in this particular Hasidic community, usually only children rode bicycles. Fighting over something they considered a toy probably made the whole thing not only infuriating but confusing for the Hasidim.

But according to Herzfield, a few Hasidic men also secretly rented bikes at night, sometimes returning overwhelmed with joy: “They say, ‘It’s beautiful! That’s wonderful !’ The bikes became little miracles that propelled them through a unique and invigorating tour of their own neighborhood. Finding a personal relationship with the bikes had changed their minds about who could ride. All it took was someone leading the way.

If non-bikers can be persuaded to read it, two wheels good could do the same. By showing that the bicycle has always been complicated, accessory for some and indispensable for others, means of leisure and work, signifying both wealth and poverty, Rosen also shows that it is universal, even inviting the most skeptical readers with his humility and humor. Bikes don’t belong to hipsters in Brooklyn or parents in Copenhagen, and riding a bike has nothing to do with the rider. You don’t have to think about your bike if you don’t want to. In all their complexity, and perhaps because of it, bicycles have always been, and always will be, for everyone.