Where I live in southwestern Colorado, the seasons change fast and hard. In the space of a day, my weather went from a wonderful streak of sunny 60 degree days to cloudy, windy and much colder temperatures with snow forecast. Winter brings icy roads, snowy trails, and winter wildlife closures, which means my opportunities for outdoor riding diminish (oh, hello again, Zwift!). As my chances of riding outdoors dwindle, I reflected on the best bikes I’ve ridden this year. And it was a great year. Between bouts of injury and illness, I rode several great bikes– but these five stood out to me the most.

The BC40 is made in the USA and is priced competitively with high-end, foreign-made bikes.

Allied’s Biggest BC40 Deal (the company’s first mountain bike) is not carbon technology, a new suspension design or its geometry. The big deal is that Allied makes this carbon composite full suspension frame in the USA. That puts it in rare company, with the Ibis Exie cross-country race bike and Guerrilla Gravityit is thermoplastic frames.

For a variety of reasons, I’m glad Allied makes their bikes in the United States in numbers that approach mass production. But that wouldn’t mean much if the BC40 wasn’t a good bike—and it is. And not only good, it’s a ripper.

The BC40 has 120mm of travel front and rear (it’s also possible to set it up in an XC race setup with 100mm of travel), with firm, sporty suspension, crisp pedaling manners and snappy handling. It sounds like a special homologation: Something designed for racing but slightly modified so that it can be sold to the public. He is extremely fast, but surprisingly capable. Plus, it can fit two bottles inside the frame, it’s damn light, you can choose your paint color, and it’s priced competitively with high-end Asian-made bikes from big name brands.

The UP isn’t a new bike, but it’s still one of the best.

The UP (Unbeaten Path) is not a new bike, but I made one for the first time this year because I could no longer ignore how much sense it made for where I am as a “road” cyclist. When this first launched in 2015, the UP was seen as a radical bike for a new category of riding called gravel. This has some minor revisions over the years, mostly switching from IS to flat mount disc brakes. The fact that the UP is largely unchanged seven years after its debut but remains relevant shows how forward-thinking this framework was. I honestly don’t consider the UP a gravel bike by today’s standards (although it will fit a 54mm wide tire with 650b wheels, 40mm with 700c: see the Otso below for what I consider a modern gravel bike) and rather see it as a dirt bike modeled on a Trek Domane. It’s a comfortable, light and responsive road bike that handles big tires, and overall it’s such a joy to ride that it made my other road bikes feel out of place.

What is a gravel bike In any event? As far as I know, a gravel bike is a dirt-friendly drop-bar bike (although there are flat-bar versions). Beyond, there is a universe of interpretations. Hell, the first UCI Men’s Gravel World Championship was won on the same frame the race of the professional teams of Canyon in the Tour de France. This victory probably says more about the course than the gravel equipment.

My rough definition of gravel riding is anything unpaved (or mostly unpaved) from the point where a typical road race bike is unsuitable to where a mountain makes more sense. So what’s a bike that can do all that? The best I’ve found so far is Otso’s Waheela C. Thanks to the adjustable chainstay length (420, 430 or 440mm) via Otso’s chip system, the Waheela C fits tires up to 54mm in 700c or 650b if conditions warrant. . But if I want a faster, sharper, more maneuverable rolling bike, I can flip the chips to the short base position (420) and run it with 35mm tires, and it rolls great.

To tackle the extreme end of gravel riding, the Waheela is one of the only production bikes with corrected suspension geometry. So it can work a Fox 32TC Where RockShox Rudy without screwing up its fit and handling (plus, it’s dropper ready). If I want to reduce some weight for smoother rides or cyclocross, I can swap out the stock fork (the front brake rolls outward, making fork changes easier). It’s not perfect—the bike is a bit heavy and the ride is a bit firm with narrower tires—but the Waheela has a long front center for stability with the quick, lively feel of a high-performance bike. Moreover, it is extremely versatile and works well in all configurations, despite the variety of these configurations. 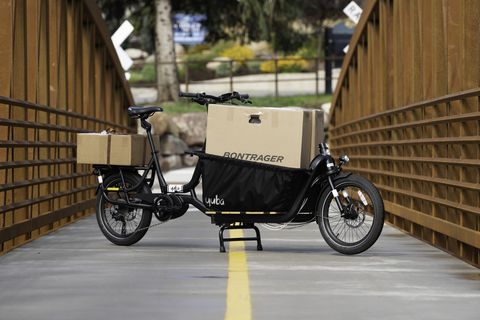 This bike is so awesome.

I almost don’t think about SuperCargo CL as a bicycle. It’s a car, a tool, a life hack: something so useful and practical that I kicked myself hard enough not to have one sooner to test. In most cases, driving the SuperCargo CL for errands is faster, easier and less stressful than driving my car.

While the $6,000 Supercargo CL is expensive, my car (a hefty 2013 Volvo XC70) consumes premium gas at an alarming rate, is expensive to maintain, and is an ongoing carbon footprint nightmare. Considering all of this, the fact that the Yuba has the cargo capacity for 90% of my trips around town— grocery store, garden store, bakery, take-out food pick-up, bicycle store, DIY store, etc. — means that it should be financially and ecologically self-financing. And while I expect the payoff to take a while, using the SuperCargo CL to scoop up a few bags of mulch is immediately more enjoyable and feels better than driving an almost empty car.

The stealthiest e-bike I’ve ever ridden.

The impressive Trek EXe chassis, smooth, well tuned and almost silent motorand low weight (for an e-bike) combine to create my favorite electric mountain bike at present. It may not have the torque and range of full-power e-bikes with massive stacks, but the EXe offers just enough support. The bike rides and feels like an excellent non-motorized mountain bike. Between its quiet operation—not just the motor, but the near-silence of the latest RockShox suspension parts—a snappy feel and “normal” manners on the trail, it almost dislodges my precious evil sequel as the most entertaining and enjoyable mountain bike I have ever ridden.

A gear editor throughout his career, Matt’s journey to becoming a cycling tech journalist began in 1995, and he’s been there ever since; probably ride more cycling gear than anyone on the planet along the way. Before his time with Ride a bike, Matt has worked in bike shops as a service manager, mechanic and salesman. Based in Durango, Colorado, he enjoys riding and testing all kinds of bikes, so you’re just as likely to see him riding a Lycra-clad road bike on a Tuesday night world ride as you are to find him dressed in a full face helmet and pads doing the bike park on an enduro bike. He does not run often, but he is ready for anything; have participated in road races, criteriums, trials competitions, double slalom, downhill races, enduros, stage races, short track races, time trials and gran fondos . Next on her to-do list: a multi-day cycling trip and an e-bike race.