The Honda HRC team takes all the victories at Washoug… 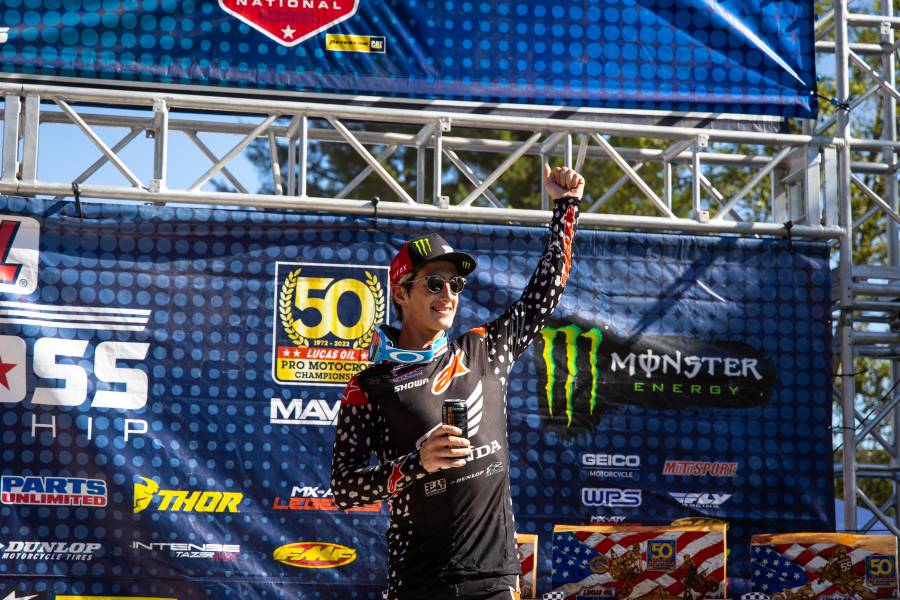 The Honda HRC team takes all the victories at Washoug…

Round eight of the series also saw Ken Roczen and Hunter Lawrence put in strong performances, with the former beating the fever to finish fourth overall in the 450 class, and the latter winning a 250 moto and taking third place in the standings. general.

The first 450 race saw Sexton start second and quickly take the lead. He was passed by title rival Eli Tomac on lap 6, but kept him close throughout the race – so close that when Tomac dropped his bike with three minutes plus two laps to go, Sexton l hit and also fell. Both were delayed in the remount, with no change in position, and Sexton finished just over a second behind. Meanwhile, Roczen moved from fifth on lap one to third two laps later, and he eventually finished fourth. Moto 2 was a tour de force from Sexton, who grabbed a huge holeshot and led all 16 laps aboard his CRF450R, withstanding 35 minutes of killer attacks from Tomac to win by over eight seconds. Roczen finished Round 1 in eighth and qualified fourth before health issues dragged him down to sixth place.

Hunter and Jett raced second and third at the start of Round 250, with Hunter taking the lead on lap five and Jett moving up to second eight laps later. From there the brothers rode to the finish, with Hunter enjoying a just over four second advantage at the end. Hunter was second at the start of Round 2, with Jett back in sixth, and they were third and fourth after one lap. Hunter dropped his bike on lap 7, letting Jett pass for third, and the defending champion was second two laps later. In the end, Jett’s consistent 2-2 moto scores were good enough for the win, while Hunter’s 1-4 gave him third place overall.