The incredible and essential Donna Lee 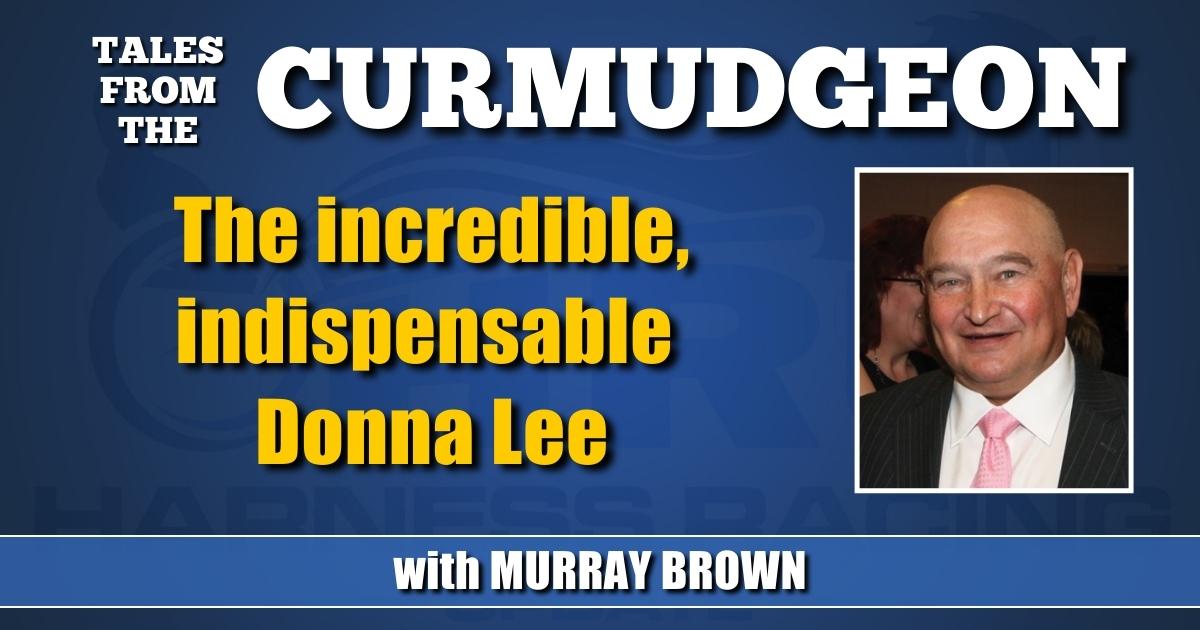 The incredible and essential Donna Lee

Tony Alagna’s mother is essential to his operation.

Is there a more unique riding situation than the one Tony Alagna shares with his mother Donna Lee? We would be inclined to think not. Alagna’s rise in harness racing was nothing short of meteoric, even if it took longer than this scribe initially thought.

In October 2009, Alagna, then working with Erv Miller, decided it was time to spread his wings and strike out on his own. He started with a dozen horses in his care. The drive empire under his control now spans between 100 and 120 horsepower.

Alagna’s mother, Donna Lee, was struggling in the faltering Illinois harness racing industry until she decided to take a break and join her son’s team.

“I had done all the accounting since he started,” Lee said. “He said, ‘Don’t worry mum, I’ll never have more than 30 heads.'”

At that time, Alagna had about 20 horses in his care.

“I was definitely the employee, not the employer. Before it was the opposite. Nevertheless, I felt that Tony needed me and that I could hopefully be of use to him and his operation. I think the arrangement worked well for both of us.

A unique situation developed in 2015. Tony had multiple Canadian owners as well as Ontario-bred horses in the stable. He asked if Donna Lee would be willing to bring a group of horses to Canada and set up camp there during the warm part of the racing season. Why not? When Donna Lee and the author spoke, she had 15 heads in her custody. She predicted the number would rise to nearly 30 once the Grand Circuit races began.

Q: How do you deal with the ebb and flow associated with the changing number of horses in your care? Next week, you’ll probably have twice as many here as you do today.

“We manage as and when it becomes necessary. The biggest problem is getting and keeping enough quality help. This is not a problem unique to us. It is omnipresent in the company. We pay well in Canada — $150 per horse and $150 per paddock. However, being a caretaker isn’t the easiest job in the world. The hardest part is the hours, specifically the need to work seven days a week and never stop working.

Q: How often do you speak with your son?

“Daily. Mostly up to four or five times a day. I have to say, though, that my son, for fear of making his head swell, is an extremely unique person. He epitomizes the term workaholic. He is on top of everything that happens with the horses, the staff, the owners and sometimes even with me. He has a photographic memory. You don’t have to say anything to him more than once. once he enters his mind, he is there forever. He knows each of his horses as well as many of them by sight. Not only does he know them, but he also knows the equipment they wear and their likes and dislikes. He doesn’t miss a thing. I don’t know how he manages to do everything he does. besides all things horse related, he’s also a great person. Seems like he’s always available to speak with the many stable owners.

Q: How many owners do you have in the stable?

Q: Have you developed a relationship with any of the stable owners?

“Tony talks a lot more with the owners than I do. I’m pretty close to Al Saul from the Big Al stable and I talk to him a bit. I guess part of that is because he’s Canadian and lives here. He loves being with and around his horses. We talk often. Another stable owner I have become friends with is Dr Richard Gordon. “Gordo”, as he is sometimes called, owns small shares of two horses in the stable, but he is as passionate about harness racing as anyone I have ever known. The weird thing about our relationship is that I often talk to him and a few other riders and consider him a friend, but we’ve never met. I had serious health problems last year. Dr Gordon was invaluable in providing information and support. Other owners I have befriended are John Fodera, Steve Wienick, Sam Bowie and of course Myron.”

Q: Can you tell us more about the health issues?

“One word cancer. I was diagnosed last winter. I had surgery and had the upper lobe of my left lung removed on March 8th. This took place after nine and a half weeks of chemo and radiation therapy in Florida. Tony, the big son that he is, came to take care of me. I told him at the time that I would be back and riding within 30 days. I guess I lied. I was back in the office in 10 days and back on the bike in 31 days.

Q: Let’s talk a bit about horses. Who’s your favourite?

“It would definitely be Caprice Hill. I had her since she was a year old until she retired from racing. She was sweet, very smart and really liked to run. If any of the other horses in the stable were to run when she wasn’t, she would go on endlessly. She wanted her share of the action. Another favorite of mine is Dr. J Hanover. When he finished racing, he was given to me as a riding horse. He is part of my menagerie which includes another retired horse and my loyal dog Freckles. Freckles and Dr. J have something in common. They are both fat and lazy.

Q: What about your team? How many people do you work with?

“It can vary from week to week. It is always subject to change. Many of our caretakers are of Hispanic descent and have been with us for some time. Tony has a big advantage in this area. He speaks fairly fluent Spanish and is able to converse well with them. Another of our indispensable associates is Hall of Famer Cat Manzi who has been with us for four years now. We added another great element last season when Jan Johnson, a man with Hall of Fame credentials, joined the team. He stayed in Florida with me to oversee the horses we had there last winter.

Q: How did it go for you? It was the first time Tony had his stable divided into two segments.

“I thought it was going very well. It was a bit of an adjustment, though. Jan and I were in charge in Florida. Tony was coming every two weeks. we’re having a banner year with our 2-year-olds. We evenly split babies and 3-year-olds between Florida and New Jersey.”

“Tony hasn’t decided yet. Of course, the final decision will be his. If it was up to Jan and I, and I guess a group of owners, we would do what we did last year. We would continue the operation in Florida. It would probably be cheaper and possibly more efficient if everything stayed at Tony’s training facility in New Jersey. Jan lives in Florida. I’m sure he would be reluctant to leave. I own a condo in Florida. Guess I could sell it, but I got used to the mild Florida weather. I am not getting younger or less resistant to change. Yet I have a bit of Gypsy in me, I like to move. Many of our owners have winter homes in Florida. They like to come to the training center and see their future champions practice. In the end, it depends on my son.

Q: You have been coming to Canada for eight years now. How do you like it?

“I like it a lot. I especially like the people. I find that, in general, they are kind, friendly and helpful. The weather at this time of year is just perfect. None of the tracks are n “is too far apart. I don’t need to worry too much about shipping great distances. There are many great riders around. I learned to really admire Ben Baillargeon and Luc Blais: There is a large community of people.

“I guess if I only chose one thing, it would probably be the restaurants. There are definitely some really good ones, but unfortunately I couldn’t find many.

Q: Who do you drive for you?

“When available, my first choice is Doug McNair. Above all, he is an excellent pilot. I think he takes good care of a horse. Our owners really like it and that’s very important.

Q: In your opinion, is there anything that distinguishes the Alagna stable from most of the others?

“We are very detail oriented. There’s nothing too small for Tony not to get involved. Another thing is that we train our horses in large groups. When our horses arrive at the racecourse, they are indeed ready to race, because there are no surprises. They know what it is. They already have. »

You have a question or a comment for
The Curmudgeon? Contact him by email at: [email protected]