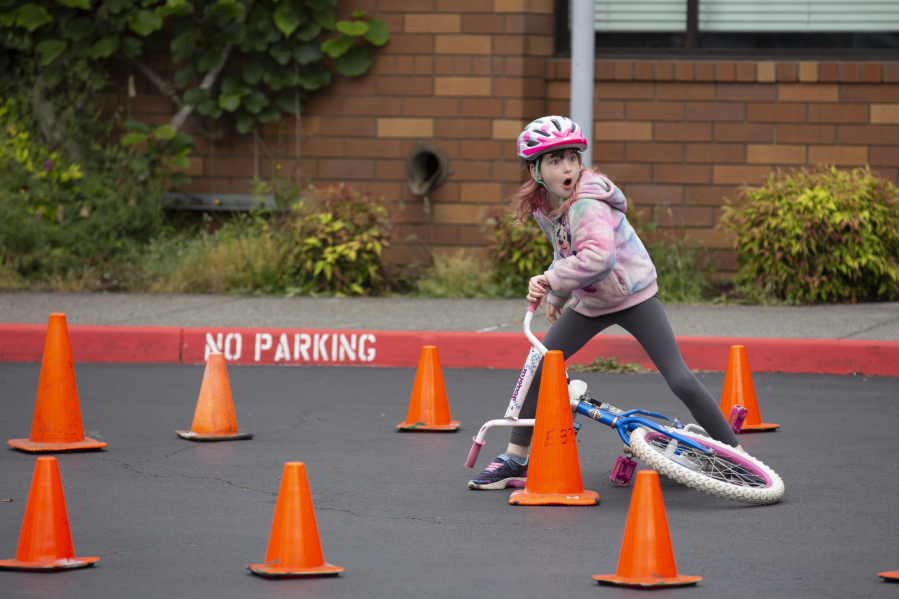 The kids were outfitted with shiny new bikes and helmets on Saturday and learned the basics of road safety at the first annual Southwest Washington Police Activities League Bike Rodeo.

Eight-year-old Joshua Ruiz was hoping for a brand new bike, with matching blue tires and wheels. He rode him from pit to pit in the Evergreen High School parking lot, where he was fitted for a helmet, demonstrated how to tighten his bike bolts and taught hand signals to communicate with nearby riders on the road. All this before embarking on an obstacle course of orange cones arranged in tight turns to test his skills.

The obstacle course ended with a mock intersection, where runners had to show volunteers their hand signals before crossing.

After years of giving away bikes to kids around Christmas, PAL – in partnership with Waste Connections – created the Bike Rodeo as an opportunity to teach kids how to be safe around toys, while also earning the chance to win a new bike. Waste Connections donated 30 bikes and helmets to give away on Saturday. The event was open to children from kindergarten through sixth grade.

Jenny Thompson, executive director of PAL, said Saturday’s event was also a great reason for people to come together again and have fun after so many community events were canceled due to the COVID pandemic. -19. Thompson said his group hopes to get the kids on two wheels just before summer when they have the best opportunity to use them.

Although Faith Autry, 8, has been chasing her two older brothers on bicycles for years, her mother, Michelle Autry, said Saturday’s booths were good reminders about road safety and bicycle mechanics. It was also a good excuse for them to try something new in the community after moving from San Antonio to Camas six months ago.

Faith couldn’t be pulled away from the obstacle course as she weaved through cones on her bright blue bike – a bike that has been in her family for generations, Michelle Autry said. Faith’s dad remade the bike for her, painting it blue and adding purple handlebar grips.

“Having a bike is so important,” Michelle Autry said. “That’s why we pass on the bikes.”

Olivia Long, 8, and Owen Long, 5, brought their own bikes from home on Saturday to compete in the obstacle course. Their parents, Ian and Anna Long, said the two spoke of their enthusiasm for the course along the way. Ian Long said his family loves to go for bike rides and take bikes on the trails.

Thompson said many of the PAL team have fond memories of riding bikes in the summer as kids, and they hope to ensure more kids have the same fun. She said the PAL team also likes to donate bikes because they can give kids a sense of independence, as well as being great exercise tools.

Ian and Anna Long agreed it was great to have more kids on the bike and said they plan to return next year, especially if they can convince even more family members to come too .