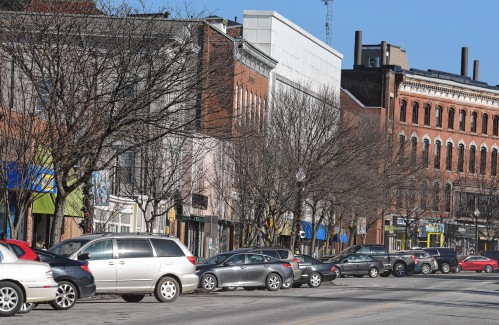 GREENFIELD — Members of the Sustainable Greenfield Implementation Committee recently met for a discussion of potential design plans for the town centre, including the viability of including bike lanes and how parking would play into such a design.

Jeff Sauser, a member of the Parking and Traffic Commission who also works as a professional city planner, and Director of Public Works Marlo Warner II were both invited to speak to the committee at the meeting, which was held almost at the end of last month.

“As a planner, I work for public sector clients and private sector clients across the country, and parking is always what it all comes down to,” Sauser said. “This is the most important question for approval. Often there is a mismatch between the amounts of parking required and the amount someone actually needs.

He said if the city was rebuilding Main Street, it was important to “get it right” and “maximize value.”

“Unfortunately the place where most people want to park is in the segment of Main Street which is the narrowest, but you can’t have a broken cycle network, so you have to choose – what are we going to solve first?” said Sauser. “I would say having a first-class cycling network is the top priority.”

Warner explained that plans for the Main Street Reconstruction Project through the State Department of Transportation (MassDOT) are “not set in stone” until the next round of funding is appropriate. , in which case there will be public hearings on the next phase of engineering.

He said cycle lanes on a street with corner parking can be dangerous, with vehicles having to turn almost halfway out of the carriageway before getting a view of oncoming traffic. Warner noted that draft plans for the MassDOT project include bike lanes with parallel parking.

George Touloumtzis, a member of the Sustainable Greenfield Implementation Committee, said that when he first reviewed the Greenfield Master Plan, he was struck by the concept of a “transportation ecosystem” which includes bicycle trips.

“I’m comfortable riding my bike on Main Street,” he said. “I’ve done it hundreds of times, but I’m really confident. …I don’t think you’ll get a lot of riders who would be comfortable with that. So you want to make the built environment as safe as possible, because that will increase the percentage of people who cycle there.

Sauser shared with committee members the conversation he moderated with business owners at a Greenfield Business Association forum, where parking was a focus. Most people who spoke at the forum were concerned about plans that included fewer parking spaces than there are now.

“I know there are business owners who don’t want to lose a parking spot because they see it as a lifeline to their business, and that’s completely understandable,” Sauser said. “But if you all have corner parking lots, you can’t have bike lanes everywhere because Main Street isn’t wide enough to fit everything you’d want in every block.”

Acknowledging business owners’ concern over the proposed elimination of parking spaces, Sauser told committee members that it’s not just about how many parking spaces an area has, but how which they are used.

“I don’t think you need a bunch of two-hour parking spots in front of an office supply store or a clothing store or a bakery,” he said, suggesting instead the use of 30-minute parking meters. “You would effectively quadruple the capacity on that street, because you would have more car traffic. … It’s a nuanced conversation, but there’s a way to satisfy everyone to some degree.

“We want to see our parking lot on Main Street well used and used appropriately,” she said.

Sauser proposed the possibility of integrating cycle paths between the sidewalk and the parking spaces.

“I think the first goal is to decide what the sacred thing is, what you really want to do,” he said, noting that a parking lot mix is ​​also acceptable. “It doesn’t have to be all parallel or all at an angle.”

Warner said traffic lane codes should factor into any decision, but ultimately he thinks it’s possible to have parking lanes and bike lanes on Main Street.

“We can do it in different ways, with what we have to work with,” he said, noting that whatever decision is made would have to meet MassDOT standards.

He stressed that there is still time to talk and work on the plans as a community.

“Hopefully as things are discussed,” Touloumtzis said, “it could be seen as an opportunity to revitalize downtown, and I know that’s what we’re all working toward. .”