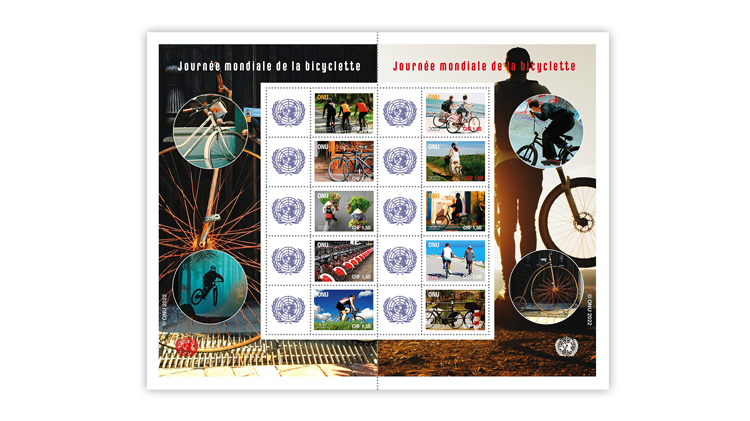 For the celebration of World Bicycle Day on June 3 this year, the United Nations Postal Administration will issue a panel of 10 stamps with labels.

In 2018, the United Nations General Assembly designated June 3 as the annual observance of World Bicycle Day. According to the United Nations, the day “brings attention to the benefits of using bicycles – a simple, affordable, clean and environmentally friendly sustainable form of transport”.

Stamps are denominated 1.50 francs for use at the United Nations Post Office at the Palais des Nations in Geneva, Switzerland. Bicycles used in various ways make up the designs of the 10 stamps.

Three of the 10 stamps show riderless bicycles. The other seven show cyclists alone or in groups of two or three. Some of them seem to travel for leisure or for exercise. However, one design shows two bicycles overloaded with plants carried by the two cyclists.

Stamp designs are based on photographs. The edge of the glass also features images of bicycles, including a penny-farthing. Also known as the high wheel, popular in the 1870s and 1880s, it was one of the first machines to be called a bicycle.

A se-tenant (side-by-side) label with the UN logo appears to the left of each stamp. Although UNPA calls this a “Special Event Sheet”, customers can personalize the labels with a photograph replacing the UN logo by visiting UN Headquarters or by uploading their photographs to the UNPA website.

world bike day describes the positive environmental impacts resulting from cycling, such as cleaner air and less congestion. The United Nations also claims that cycling provides the most vulnerable populations with better access to education, health care and other social services.

These services are made more accessible both by the use of bicycles and by the routes on which to take them. According to the World Health Organization, safe infrastructure for walking and cycling is a form of transportation for people in poorer urban areas who may not be able to afford private vehicles.

Additionally, the United Nations claims that due to cycling promoting economic growth, reducing inequality and boosting the fight against climate change, it is a sustainable transport system. essential to achieving the organization’s sustainable development goals.