Tim Gajser of the HRC team maintains the championship… 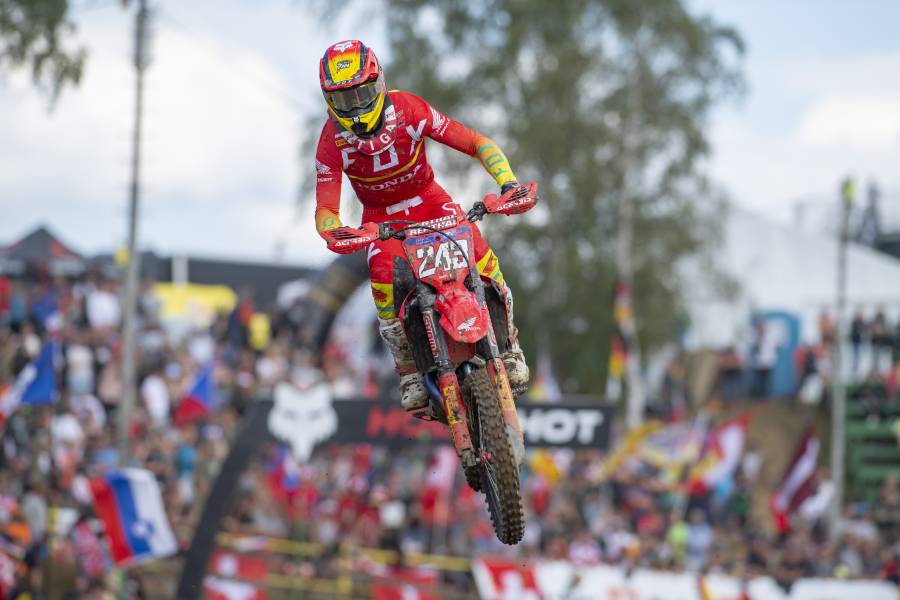 Tim Gajser of the HRC team maintains the championship…

Team HRC’s Tim Gajser started today’s races with a 125 point championship lead and was hoping to put more pressure on his competitors as he battles for his fifth World Championship for Team HRC .

In race one, the Slovenian got off to a good start and dropped to second on the opening lap, but struggled to find a rhythm on the dry, loose Czech track. Tim dropped to third on lap three, but regained second on lap nine as his speed and fluidity improved. It was too late to claim victory, but the 22 points from the first race meant he increased his championship lead.

Tim’s teammate Mitch Evans rode well in race one and continued to show clear signs that his recovery from last year’s wrist injury is nearly complete. Evans completed the opening lap in sixth place and although there were some odd position swapping during the race, on each lap he passed the timing marker in the same position. It was a solid and promising result for the Australian.

Although Rubén Fernández (Team Honda 114 Motorsport) showed great promise leading Saturday’s free practice session, an accident in timed practice left the Spaniard with stitches in his arm, a concussion and a beaten body caused him to miss today’s race.

Stephen Rubini of Shiptocycle Honda SR Motoblouz had high hopes of a good result on the steep French-style Loket and in race one he did not disappoint. A good start put the Frenchman in third place on the first lap as he set up a fast and consistent pace. He conceded position on lap seven and stalled the bike frustratingly on lap 16 to drop to fifth at the finish.

As the tough circuit baked under blue, sunny skies, the gate fell for the second race of the MXGP and Gajser rounded out the first lap in third place and pushed hard to repel early-race attacks. As the race developed, Gajser found extra speed and closed in on second place, but a small hand pump set in and he settled for a safe result to protect his championship lead of 125 points after 13 of 19 races.

Mitch Evans rode another strong run in race two. He started the race in fifth place and held his position for 14 laps, but had developed painful blisters that were hard to ignore. Evans therefore had to settle for 7th place at the finish, which earned him 7th place overall, just three points from a peak. five finishes.

Stephen Rubini was hoping for another good result in the second MX2 race and got off to a strong start, finishing the first lap in fifth place. Unfortunately for Rubini he was also suffering from blisters and the discomfort and lack of grip marred his focus and ability to ride as he can. The much-improved CRF250R racer ultimately finished race two in 12th place, giving him 9th place overall.

The gate drops for round 14 in a week in the endless sands of Lommel, Belgium.