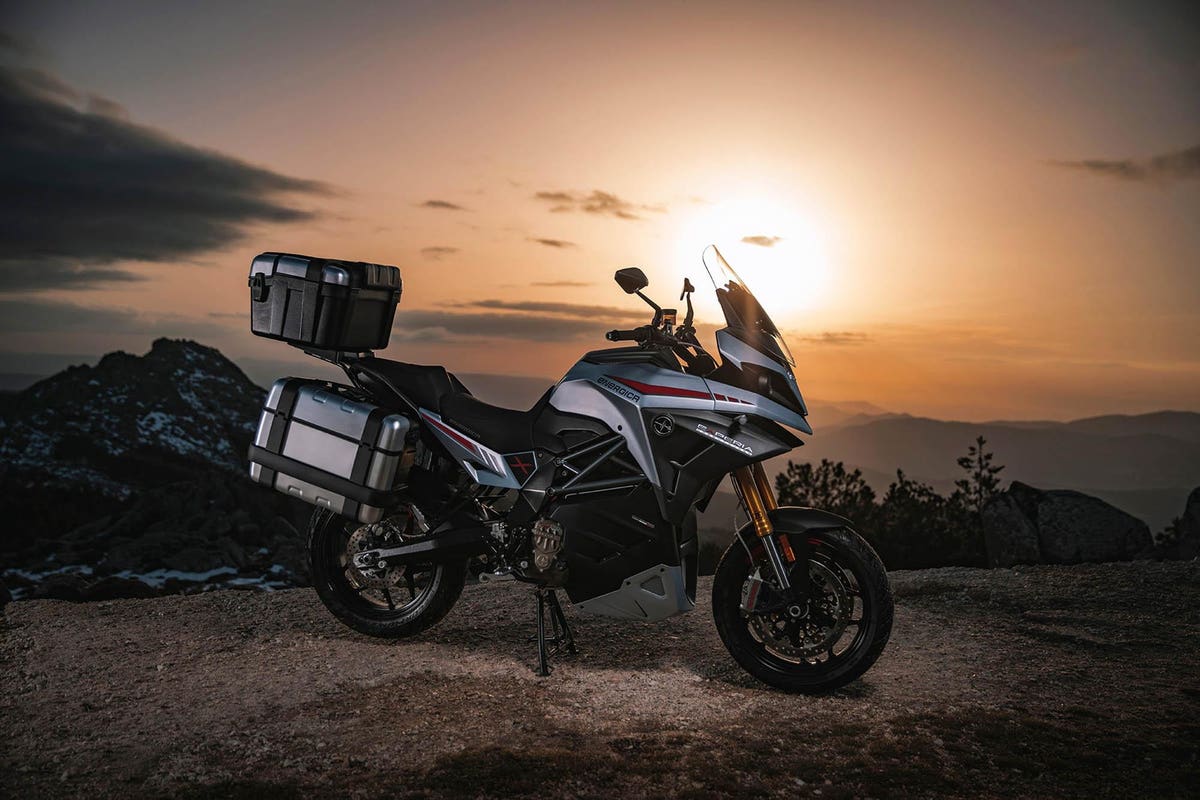 US-based electric transport and ESG investment firm Ideanomics (IDEX) completed its purchase of Italian electric motorcycle maker Energica Motor Company late last year, and a new motorcycle model and plans to expansion show growth is the plan for the boutique bike maker that was founded around the same time Elon Musk was assembling his first electric cars. But all the while, Energica has remained a small-scale, low-return operation, while Tesla has grown into a dominating, trillion-dollar market giant. That could start to change.

Ideanomics is looking to make a name for itself for relatively unknown Energica bikes in the North American market by moving forward with new models, dealer expansion plans, and capitalizing on proven battery and controller technologies. bicycle motor in the developing e-mobility market, part of a new venture at Energica known as “Energica Inside”. More on that in a moment.

The big near-term news for Energica is that production is starting on its fourth electric motorcycle model, the Experia, an all-new design that has resulted in a motorcycle that is less powerful than the brand’s other models, but is much more practical – and perhaps much more marketable.

The $25,880 Experia is a “sport-touring” model, sort of a mix between the high performance of a sport bike and the comfort and capability of a touring machine. The pilot enjoys the scenery from a comfortable and quiet cockpit, but if the road gets twisty, the Experia has the handling chops to keep things interesting. The Experia is designed in the vein of the current ‘adventure bike’ (or ‘ADV’) category that is currently white-hot in the motorcycle industry and indeed, with more aggressive tires and a few more tweaks, it looks like the Experia could stray a little off the pavement – and Energica is lightly marketing it as such. Other models in this class (and price) include BMW’s popular 1250 GS and Ducati Multistrada models, among many other brands. The ADV class is so popular that typically cruiser-focused Harley-Davidson introduced an all-new, high-tech adventure model last year, the Pan America, to rave reviews. See my review below.

Energica calls the Experia a “green tourist” rather than an adventure bike. The $25,880 price buys the Launch Edition bike, adding things like three ADV-style hard panniers and a few other upgrades. Nearly $26,000 isn’t an unusual number for a top-of-the-line ADV or sport-touring machine that’s equally comfortable and capable. Almost all major motorcycle manufacturers now have adventure bikes in their lineup, with models varying widely in price. The Experia is definitely at the higher end of the scale, but it has the technology and performance to match.

Where the Experia deviates from the competition is of course in the propulsion system. Instead of pistons, gears and gasoline, the Experia is powered by a new battery and a new 102 horsepower liquid-cooled electric motor. It has no gears, no clutch and no exhaust. The battery has been completely redesigned, so it’s no longer a big box the bike has to be built around like in previous models. Instead, it has lobes and sections and fits into a reworked, slimmed-down frame, which makes the bike easier to ride, since it’s also quite tall. And instead of succumbing to the temptation to always add more horsepower (which is especially easy to do with electric powertrains), the Experia reduces horsepower with this new engine, which is both smaller and 22 pounds. lighter than the motors of other Energica machines. . For comparison, Energica’s engine in its halo model, the Ego RS sport bike, produces up to 171 peak horsepower and over 150 pounds of torque – numbers that would make a car lively enough, not to mention a motorcycle. As you can well imagine, the Ego and its streetfighter-style sibling, the Eva Ribelle, are beyond supercar speed, with 0-60 times nearly 2.5 seconds – if you can keep the front wheel on the ground. A third model, the EsseEsse9, is a little more tame, but not by much.

Huge power is great for race tracks and short-duration high-speed driving, but just like having a big V8 engine in a car, it tends to eat away at the fuel supply in a hurry. For the Experia, Energica cleverly opted for the smaller motor and a new larger battery offering a maximum capacity of 22.5 kWh – the largest electric motorcycle battery currently offered by any bike manufacturer. The smaller motor also sits lower in the frame, making it easier to handle and helping the bike feel lighter than its 573 pounds would suggest. Even with the smaller engine the Experia can still clear triple digits with ease and is electronically limited to 112mph but a lot of top speed wasn’t what Energica was looking for with the Experia the real focus is to tackle the Achilles heel of electric motorcycles: extended driving range. The company says city range will be over 250 miles before a charge is needed, while highway driving nearly halves that number to 130 miles at a steady 73 miles per hour. . Mixed driving will average 160 miles, depending on the “mix”. More speed and more miles on the highway equals less range, and vice versa. For comparison, most other electric motorcycles on the market can barely achieve 100 miles of range in mixed riding. Motorcycles have a

Electric powertrains work the opposite of gas-powered machines, achieving better “mileage” (or range, in the case of electric vehicles) in csto-and-go urban commuting where regenerative technology charges the battery every time that a motorcycle (or an electric car) slows down, and lower speeds also require less electric power. And while 130 miles of pure highway range doesn’t sound like a lot, many riders want a break to stretch, eat, nap, drink or check their phone after more than two hours in the saddle. And when it comes to charging the Experia, Energica leads the way in this regard too, with all Energica motorcycles accepting high-rate DC Fast (“CCS”) chargers that will zap 80% of the battery in an hour. The bikes will also charge using common Level II home chargers, or they can be plugged into a wall outlet like a device. Slower, but better than nothing.

Deliveries of the new Experia are expected to begin in September for customers who pre-ordered the bike after it was announced earlier this year.

Alongside the new Experia, Energica is also looking to leverage its expertise in electric powertrain technologies with a new initiative called “Energica Inside.” Under this program, Energica could work as a consultant with companies that may not have the technical or financial resources to undertake significant R&D efforts or beta system iterations when building electric powertrains. They could also partner with larger companies looking to accelerate their electrification efforts.

However, Energica CEO Livia Cevolini told Forbes.com that Energica would not specifically building technology for these companies, they would instead provide the “expertise” they have developed in battery technologies, motor controllers, charging and power management since launching their first electric motorcycles ago more than ten years.

While the “advisor” approach to data and design is very different (and perhaps more cost-effective) than building the actual EV technology that other companies would pay for, it suddenly becomes a cluttered area – and it could become even more saturated on a large scale. players decide to get into the manufacturing/designing game for other OEMs which is easier to get into with electric drivetrain technology than, say, launching fancy new gasoline or diesel engines.

Already in the electric motorcycle space (or just the non-electric car space), market leader Zero Motors is already working with UTV/ATV icon and Indian Motorcycle parent Polaris (PII). Smaller players like three-wheeled electric vehicle maker Arcimoto (FUV) are also looking to partner up, making Energica’s “Inside” game far from guaranteed. Arcimoto plans to produce the basic chassis and propulsion hardware (below) for other EV manufacturers instead of just fulfilling an advisory role as well, so there are clearly multiple ways to play at this point.

Partnering with a much larger vehicle maker as a development partner that isn’t already in the EV space would be a key win, as if Energica were to partner with, say, Kawasaki, which has struggled with electric vehicle efforts to date, or a European automaker. However, most automakers have now dedicated resources to EV development and would most likely want to maintain their “in-house” efforts at some point to cut costs and streamline integration, so it might be difficult to sell for Energica Inside. But CEO Cevolini, one of the few female leaders of a transportation maker and who has led Energica from the start, is undeterred. “” Forbes.com said.

Time will tell and indeed, context is important: we are still in the very early days of the EV revolution in transport, so really, anything is possible. Meanwhile, Energica has what could be a groundbreaking new electric model on its hands, and pre-orders are piling up.

Look for my full review of the Energica Experia later this fall here on Forbes.com.