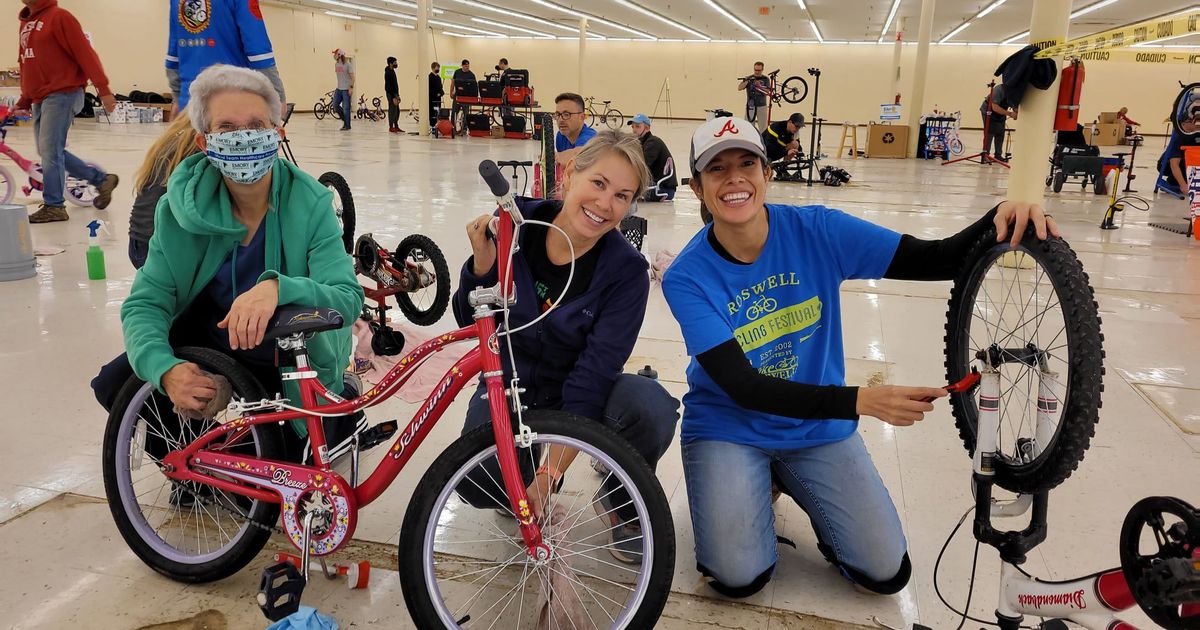 “Domestic Day” at the warehouse is “like a pep rally for people who love bikes,” said Jackie Tyson, founder of Bike Alpharetta, a nonprofit advocacy group promoting bike fun and safety. bike.

Roswell and Alpharetta firefighters will hose down the bikes in the parking lot, then volunteers will bring them inside and dry them. Mechanics from area bike shops will be on hand for major repairs.

The bikes will also receive new tubes and tires, paint touch-ups and everything needed to make them “ready for Santa”. Santa doesn’t like rusty chains, torn seats or stuck gears.

“If it’s not something Santa Claus would get out of his sleigh and roll under the tree, then we can’t use it,” Tyson said.

Bikes can be donated through Dec. 1 at North Fulton bike shops, such as REI Co-op Alpharetta and Roswell Bicycles. New or used bikes with light dust and no rust are preferred.

The biggest needs are for small 10-16 inch youth bikes and 24-28 inch mountain bikes. Small tricycles and scooters for toddlers are also in demand.

Bikes that are not up to standard will be dismantled for parts and then recycled. Last year, 3,760 pounds of metal and 142 tires and inner tubes were sent to the recycling center.

Bikes For Kids was started in 2007 by Brian Mullenbach of Johns Creek. The first year, he and his family salvaged 65 bikes from neighbors and restored them in their garage. The project grew every year and in some years they received up to 700 used bikes.

Bike Alpharetta agreed to take over the project about eight years ago when the Mullenbachs moved out of state. In 15 years, Bikes For Kids has provided 4,310 bicycles, tricycles and scooters and 1,620 youth helmets, all free, to the NFCC.

Toyland’s most requested item each year is a bicycle, Tyson said.

“I was told that if we didn’t collect and clean these bikes, there would be no more bikes,” she said. “This just broke my heart.”

North Point Community Church donated $4,500 worth of tires, tubes and parts, and 27 new bikes were donated by Johns Creek Baptist Church and assembled by the Oswald family and emerging leaders of the GNFCC.

At REI, bike director Erik Peterson said the Alpharetta store is a strong supporter of Bikes For Kids. At the end of October, a dozen bicycles, brought by donors, were hanging from the ceiling of the stores. The REI bike mechanics had already repaired some of them and will repair others on the day of the Maid.

Officers from the Alpharetta Police Department’s Bike Patrol Unit also help with the project by picking up and storing hundreds of bikes throughout the year. Some of the donations come from other police departments. They also participate in cleaning and repairs.

“We tend to be the first people they think of when they want to get rid of an oversized bike,” Officer Allen Elfreth said.

“It takes a village, and we’re happy to be part of it,” said Officer Amanda Clay.

Getting a bike is always a big deal for a kid, Tyson said. It gives them a first taste of freedom and helps them learn to be responsible and make wise decisions.

Tyson still remembers his first bike. Growing up on a farm in North Carolina, there wasn’t a lot of money, but she and her brother received used bikes one year old as birthday presents from their father. They probably cost $10 each, she said.

“It was the most fabulous thing I’ve ever had,” said Tyson, who still rides his bike regularly as an adult. “I remember how happy it made me because a bike gives freedom to a child.”