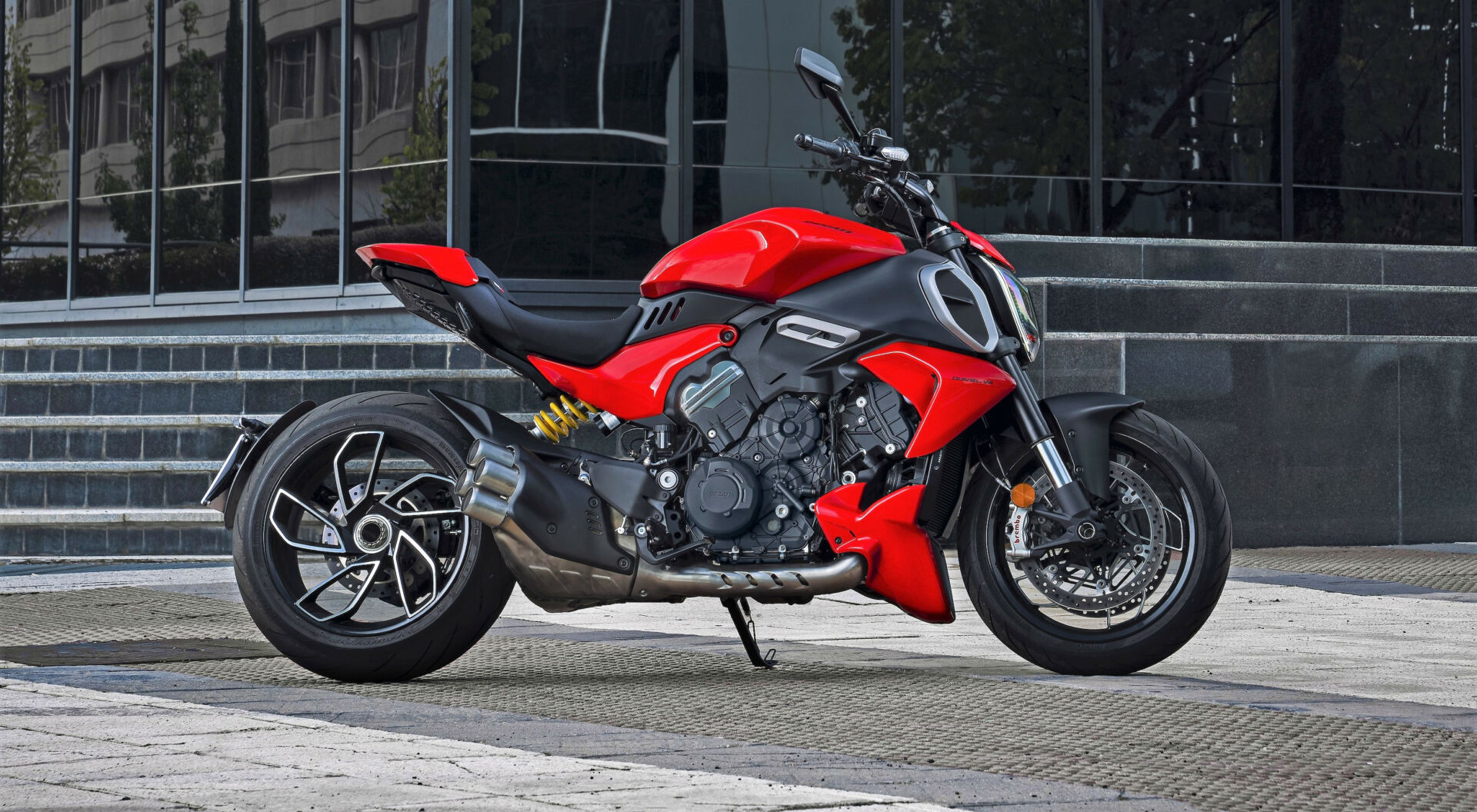 Editorial note: Scroll down to see the video.

The Ducati Diavel V4 is unique, unmistakable and bursting with personality. With the introduction of the sophisticated V4 Granturismo engine, the performance of the Diavel becomes even more stunning. With 168hp and 126Nm of torque, the Ducati 1158cc V4 is the ideal engine for a muscle cruiser, capable of combining linear low-end power with vigorous torque throughout the rev range.

Muscular, sporty, exaggerated and elegant at the same time, the Diavel V4 combines the unique technical, dynamic and stylistic characteristics of naked sports and muscle cruisers. This machine meets the multiple desires of motorcyclists, from the sportsman looking for a more comfortable and stylish motorcycle to those who wish to ride in an urban and relaxed setting, passing through the amateur of performance and drag racing iconography.

The updated Ducati Diavel V4 surprises with its dynamic performance, its ability to satisfy sporty driving and excite with impressive acceleration and deceleration, as well as low-speed cruising. Nothing goes unnoticed thanks to the incomparable stage presence of Diavel V4. More so, it amazes with its suitability for mid-range touring while remaining surprisingly comfortable for rider and passenger.

The Diavel V4 communicates an important presence from the first glance. Muscular and gritty, with its broad “shoulders” and its four proudly visible exhaust outlets, the Diavel V4 2023 immediately declares the sophisticated architecture of the engine. The Diavel V4 is inspired by muscle cars and superhero aesthetics and captures the image of an athlete ready to sprint from the starting blocks, with all the mass concentrated at the front and a nimble tail and profiled.

The rear light cluster consists of a matrix of point LEDs placed under the tail with an unmistakable Ducati light signature: a unique, unprecedented and spectacular solution that is immediately recognizable.

As with previous Diavels, the massive 240/45 rear tire remains a distinctive feature. The wheels are five-spoke alloy with a profile embellished with machined surfaces, one of the most refined elements of the Diavel V4 aesthetic.

The Diavel receives the 1158 cc Granturismo V4 engine, a central element of the bike’s design. This technical choice simultaneously improves performance, dynamics and riding pleasure thanks to Ducati’s sophisticated choice of a counter-rotating crankshaft, which reduces the gyroscopic effect while increasing the bike’s agility.

Powerful (168 hp), rich in torque at every rpm (with a peak value of 93 lb-ft (126 Nm) at 7,500 rpm) but also extremely light and compact, the V4 Granturismo (which derives from the Desmosedici Stradale from Panigale and Streetfighter V4) is both fluid and pleasant from the lowest revs. It is also characterized by low operating costs, with major maintenance at intervals of 37,000 miles (60,000 km) – a record value on the world stage – and efficient in terms of fuel consumption and emissions thanks to to the extended cylinder deactivation system. This function cuts the rear bank not only when the vehicle is stationary, but also when driving at low revs under reduced engine load.

The Twin Pulse firing order, together with the dedicated exhaust system developed with particular attention to “sound quality”, unequivocally characterizes the cachet of the V4 Granturismo. The extended rear cylinder deactivation system, which allows the engine to run in twin or four cylinder with an imperceptible transition due to its progressiveness, generates a change in the tone of the exhaust noise when switching from one mode to the other. A deeper sound, with lower frequencies, characterizes the V4 Granturismo when only the two front cylinders are active. Frequencies get higher when all four cylinders are running.

The exhilarating performance V4 Granturismo engine is combined with surprising agility and dynamics for such a bike. The Diavel V4 has a fuelless curb weight of 491.6 lb (223 kg), saving over 28.6 lb (13 kg) (11 lb (-5 kg) on ​​engine, 17.6 lb (-8 kg) on ​​the vehicle) compared to the Diavel 1260 S. All without compromising on component refinement and efficiency, with a 50 mm inverted fork and cantilever shock, both fully adjustable. The braking system relies on Brembo Stylema® calipers and two 13-inch (330 mm) front discs.

The result is a motorcycle capable of breathtaking acceleration and deceleration. Indeed, the performance of the V4 Granturismo of 168 hp, associated with the 240/45 rear tire and the dedicated transmission, allow it to accelerate from 0 to 60 mph (100 km/h) in less than 3 seconds while delivering a really impressive ride. .

The supersport type braking system, with 13-inch (330 mm) discs and Brembo Stylema® calipers, ensures record-breaking performance, with maximum deceleration values ​​of up to 37.7 feet (11.5 m) /s2: a value that generally characterizes racing motorcycles. And only obtainable thanks to a very refined calibration of the ABS system.

The rider can also take advantage of a low seat (31.1 in (790 mm) from the ground), center footpegs and high handlebars that are 0.78 in (20 mm) closer than on the Diavel 1260 , which makes it easier to use, especially during manoeuvres. . These specs are at the center of the bike, maintaining a riding position that provides comfort while visually conveying a sense of control and confidence.

Comfort also improves considerably on long trips thanks to the rear suspension, which increases travel by 0.6 in (15 mm) compared to the outgoing model, and especially to the wide and well-contoured saddle. The Diavel V4 seat is designed to provide maximum freedom of movement in all directions, providing benefits for those interested in a sportier ride.

The passenger can count on a spacious and comfortable saddle, footrests that retract under the tail and a telescopic rear grab bar. The footrests and grab bar are effectively invisible in the retracted position and, together with the standard, easy-to-fit passenger seat cover, allow the Diavel V4 to be transformed from a two-seater to a single-seater with minimal effort.

Thanks to an extremely complete electronic package that enhances the sporty soul of this bike, cyclists can safely exploit the performance of the Diavel V4. The Diavel V4 comes with three power modes and four driving modes: Sport, Touring, Urban and the new Wet, designed for low-grip surfaces. The riding modes allow riders to adapt the delivery of the engine and the intervention of the riding assistance systems (Ducati Traction Control in Cornering version, ABS Cornering and Ducati Wheelie Control) to the situation and the preferences of the rider.

You can also manage all the electronics with backlit handlebar controls and the new 5-inch color TFT instrument panel, which also offers Bluetooth connectivity to pair your smartphone for calls, text messaging and music, or use Turn-by-Turn navigation system. (available as an accessory) via the Ducati Link app.

Enthusiasts who wish to improve the touring capabilities of the Diavel V4 will find numerous options in the Ducati Performance catalogue.

Options start with hard-shell cases ready to carry a total capacity of 12.7 gal (48 liters). No worries about mounting brackets; the Diavel V4 is equipped – no pannier frame is needed. A passenger backrest and the touring plexiglass (windscreen) are also available for comfortable travel with a passenger.

The sportier side of the Diavel V4, on the other hand, is amplified by the road-legal exhaust silencer with a cover and four titanium tips. For those who want to go further, a full racing exhaust in the “Spitfire” design is available with four in-line outlets. This non-homologated exhaust features steel manifolds, a titanium muffler and a carbon fiber cover that offers a weight reduction of approximately 24 lbs (11 kg) and an increase in maximum power from the V4 Granturismo up to 12 horses, which brings it to 180 hp.

The new Diavel V4 will be offered in classic Ducati Red or Thrilling Black and will be available at US and Canadian dealerships beginning Spring 2023.

The dynamic video of the Diavel V4 can be viewed on Ducati’s official YouTube channel.