Video: Motorcyclist flees the scene on an electric motorcycle after allegedly hitting and injuring a mountain biker 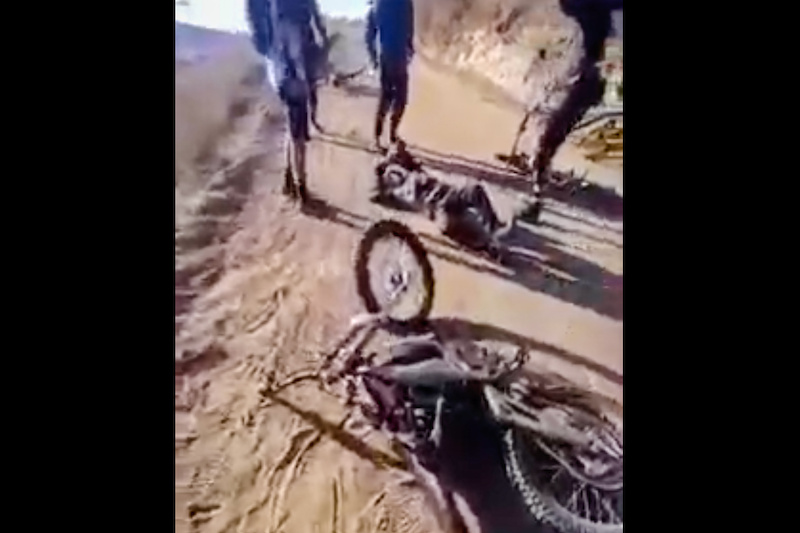 Video: Motorcyclist flees the scene on an electric motorcycle after allegedly hitting and injuring a mountain biker

A video posted to Reddit and other social media appears to show a motorcyclist fleeing the scene on an electric motorcycle after allegedly causing an accident which seriously injured a mountain biker.

The video was taken in San Clemente this weekend. The video does not show the crash itself, but a man believed to be the victim posted on social media that he was hit at 50mph by an electric motorcyclist heading in the opposite direction. The video shows the victim lying on the ground surrounded by other cyclists while the other cyclist checks his bike before riding away, leaving the victim on the ground. The injured rider later confirmed that his jaw was broken in two places and after the operation he will have to have his jaw wired for 6 weeks.

It should be noted that the alleged perpetrator’s bike appears to be a Sur Ron “restricted-use electric motorcycle” and not a pedal-assisted, limited-speed eMTB. These bikes have a lot more power, no pedals, and are capable of much higher speeds than a trail-legal eMTB. These types of bikes are not legal to use on most mountain bike trail networks and must be registered and insured for road use in many countries.

The rider said: “I was hit head-on on the mountain bike trails by an electric motorcycle going 50mph. I have a broken jaw in 2 places, just got out of surgery and have had my jaw wired for 6 weeks. It’s basically a silent motorcycle not a pedal assist e-bike and doesn’t belong on MTB trails and that’s why! You also look at the rest of how the incident was handled. It’s a big life change for my last days of work before my Christmas holidays. Thank you to all my friends, family and the best guys on the dog park ATV team for listening and letting me let off steam and tell my story. #dogparkcrew”

We wish the injured rider a speedy recovery and hope he can ride again soon.