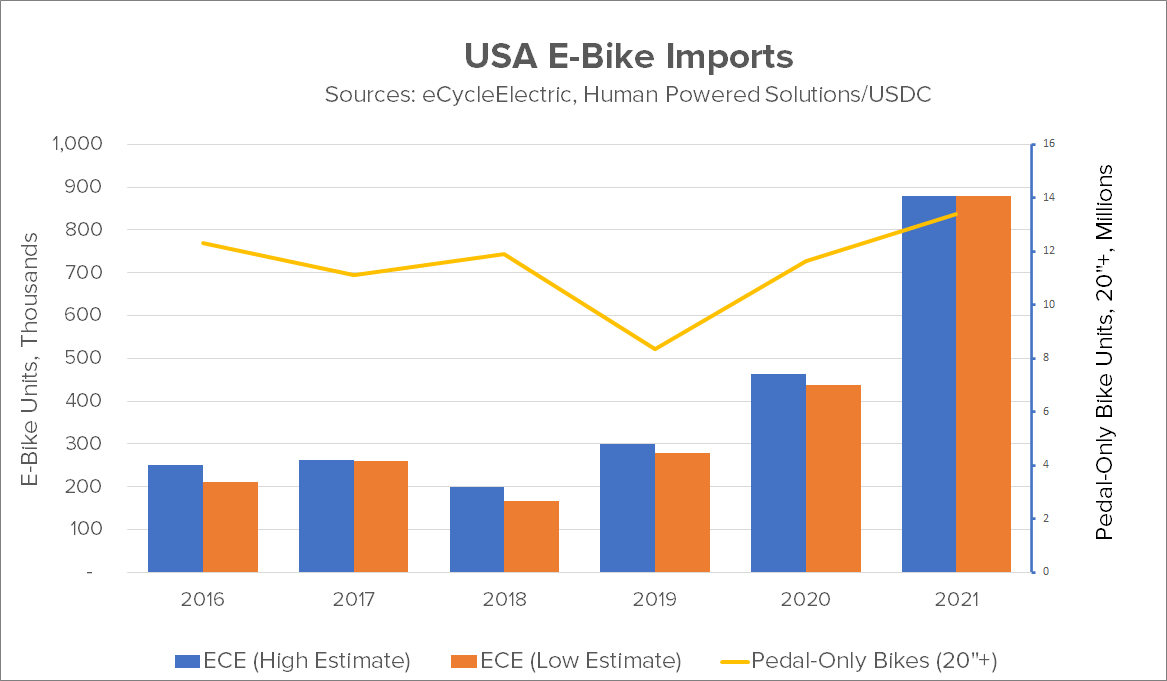 When you want a bird’s-eye view of what’s happening in the US e-bike market, the person to talk to is Ed Benjamin.

Among other things, Benjamin’s company, eCycleElectric, tracks e-bike imports. It’s a tougher job than it looks, because e-bikes can be imported under more than a dozen different HS numbers (Department of Commerce import codes) and Benjamin’s company has to keep up. all of them, for hundreds of importers.

When we looked at the e-bike market last year, IBD sales were emerging as the category leader, but that’s no longer the case. The rise of sophisticated B2C brands selling at or near what has traditionally been e-bike price territory is a signal that more Americans are willing to buy a quality e-bike without the benefit of a trial, assembly or after-sales service of the supplier. . More on that in a minute, but first let’s take a look at the e-bike market as a whole for 2021.

“The business continues to be very strong,” says Benjamin with characteristic understatement. “I guess we’ll break a million units in 2022 or 2023.” So, in a time of constant product shortages, where does all this inventory come from? In 2020, as the Covid pandemic hit and most IBD bike brands were frantically canceling orders, hundreds of e-bike brands, both B2B (including Specialized) and B2C, made huge bets that the e-bike market would skyrocket…and those bets paid off.

How D2C sales are taking over the market

“In terms of percentage change, other chains are ahead of bike shops,” says Benjamin. “In fact, D2C brands like Rad Power or Aventon dominate at the $1500 price point. $2500 seems to be the starting price at bike shops. As far as I know, most D2C companies offer something in the price ranges of bike shops,” he continues. “Not their top sellers, but they are slipping into bike shop territory. The fact that bike shops still exist is a testament to their resilience, but they are quickly being overtaken by D2C brands.

“Bike shops have gotten a little better over the past 20 years, but the folks at D2C have become awesome in product quality, assembly, packaging and customer service.” —Ed Benjamin

How is it possible? Simple, says Benjamin. The best D2C brands have mastered the art of customer satisfaction and customer service. At the same time, the pandemic has taught Americans to become direct buying experts. Benjamin insists on the nature of this change. “Going to a brick-and-mortar store isn’t the obvious thing to do anymore,” he says. “Most importantly, D2C brands are becoming experts in supporting these customers. Their service is improving and so are the products they offer in terms of service and reliability.

That might seem unlikely, given the horror stories many dealerships tell about servicing consumer e-bikes. But there is also some confirmation bias in this observation. After all, bike shops only see D2C bikes when they have problems. Those where everything goes well are effectively invisible to the channel.

“Bike shops have gotten a little better over the past 20 years, but the folks at D2C have gotten great in terms of product quality, assembly, packaging, and customer service,” says Benjamin. “The amount of information they regularly offer about the bike is more than the bike shop clerk knows about the product. Bike shops should have an advantage because you can test the product, but that doesn’t seem to be happening. Now D2C brands are targeting bike shop prices. Will they get there? I do not know.”

“The Achilles’ heel of the D2C model is service,” emphasizes Benjamin. But most e-bike problems are bike problems – flat tires, etc. Working on e-bike parts is more difficult, and many bike shops will not work on bikes not purchased there.

Despite this, bike shops are becoming more flexible when it comes to repairing e-bikes. LEVA, the Light Electric Vehicle Association, of which Benjamin is founder and president, has brought in 1,600 people through its e-bike repair program over the past few years, “and probably a thousand of them are bicycle mechanics. I think we need around 8,000 to establish a critical mass of available service people,” adds Benjamin, “not just in bike shops, but also in mobile mechanics and one-person repair services. .

The growth of the direct-to-consumer market is one thing, but Benjamin’s most radical idea is that the growing power of D2C sales is transforming the bike itself.

Direct-to-consumer sales are booming, he points out, in both e-bikes and pedal-only models. And D2C will continue to become a larger share of both markets. As stated earlier, the Achilles heel of the D2C channel is service. So what better way to minimize the service problem than to make bikes that require less?

Bearings, brake shoes, spokes, tires, cables and other miscellaneous items all need fixing, agrees Benjamin. But they can all become less service-intensive. Bearings will last longer. Wire spoke wheels will become rare and cast wheels are already becoming cheap and very precise. And we are already seeing a shift from cables to hydraulics.

D2C brands have the profit margins to absorb the higher upfront cost of low-maintenance components without increasing retail prices, Benjamin says. But over time, the cost of these parts will decrease, just like automobiles.

“The (bicycle) industry could, if it wanted to, ship a bike to the consumer that needs little or no maintenance, just like cars today. It’s just a matter of engineering and industry mindset. —Ed Benjamin

“The automotive industry is already at this stage,” says Benjamin. “Car warranties in the 1960s were 12,000 miles. Today it’s 50 or 100,000. Consumers express a preference for bikes shipped direct to them. The (bicycle) industry could, if it wanted to, ship a bike to the consumer who needs little or no service, just like cars today.

“It’s just a matter of engineering and industry mindset,” he says. We don’t have those parts now, but there are vendors who can make it happen and some of them are doing it right now. Quality batteries now come with a five-year warranty; there are e-bikes that have been in use for the past ten years and the batteries are still going strong. And in the long run, it doesn’t have to cost more.

Over time, the cost of the lower-maintenance bike will come down as manufacturing adapts to demand, Benjamin says. Electric bikes may well lead this evolution, simply because the electric market is more accepting of the change.

Still, it is not clear that the physical retail channel will soon be bankrupt. As we press this story, Rad Power, the industry leader in D2C e-bike sales, has just announced that it will open five new physical outlets in major US markets in 2022. Still, Benjamin sees a rosy future for D2C, as long as he can start re-doing the bike himself. Will dealerships be relegated to the role of showrooms and service centers? “It’s already happening,” says Benjamin.

“I grew up in bike shops, I owned bike shops and I will be sad to see them go.” But the evolution is already in place, he says, and its ability to fundamentally alter the entire IBD channel is only a matter of time.