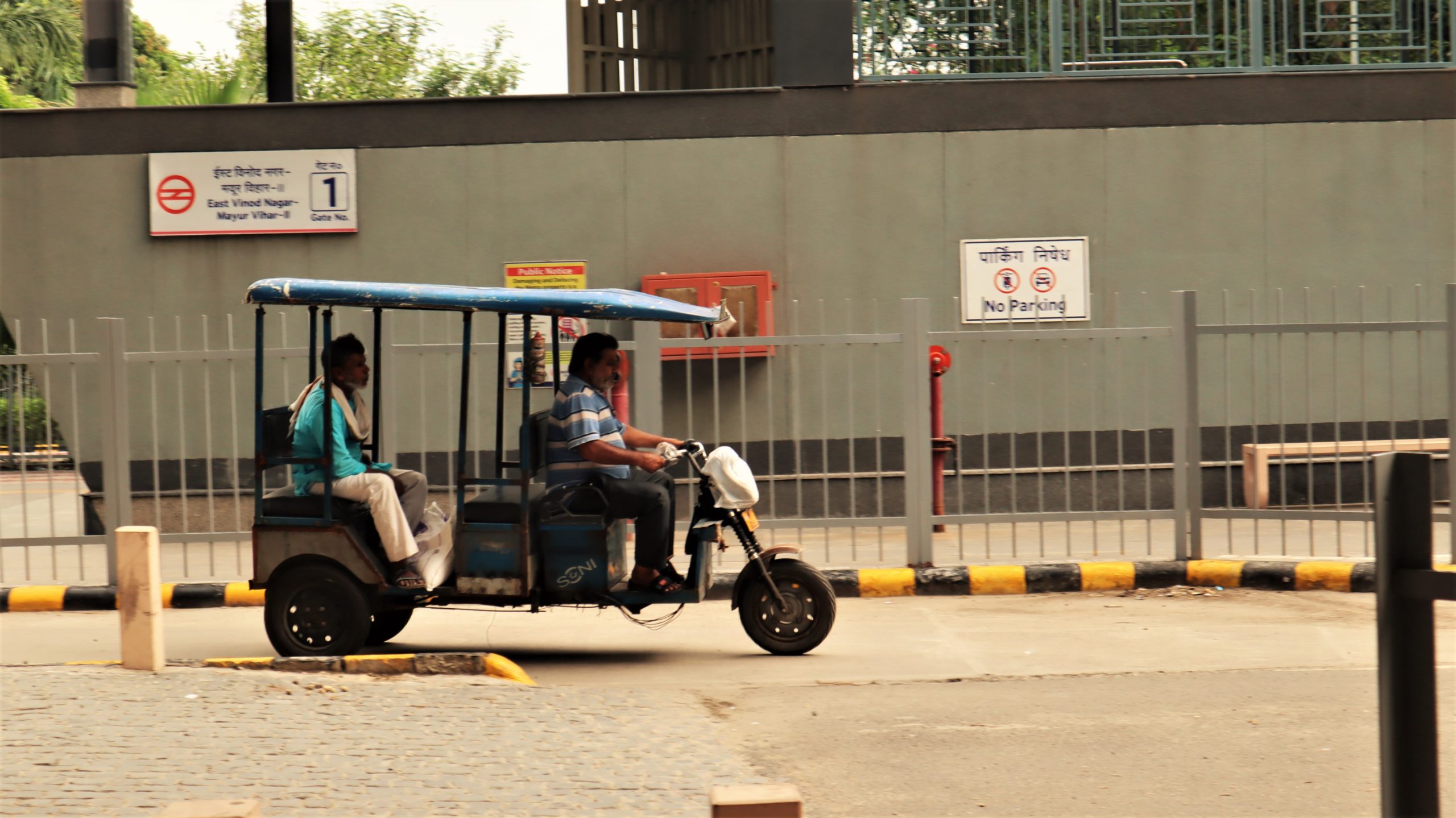 After a lull due to the pandemic, electric vehicle (EV) sales in Delhi have surged and continue to rise. In 2022, breaking all previous records, the Union Territory saw a total of 25,890 electric vehicle sales in the first six months. This was the highest on record, also exceeding the number of annual sales in previous years.

In Delhi, while private electric two-wheelers and four-wheelers are still popular, there is growing interest in electric vehicles for commercial food deliveries, e-commerce website deliveries and porter services. There are also electric rickshaws, electric carts, e-bikes and even electric-only cab aggregator services that have sprung up to reduce business input costs while simultaneously reducing vehicle carbon emissions. gasoline.

Take the case of BluSmart, a Gurgaon-based electric taxi aggregator that started operations in 2019 with 70 electric taxis to meet the commuting needs of people in the National Capital Region (NCR) and ensure emission-free driving in polluted areas. streets of the nation’s capital. Puneet Goyal, co-founder of the company, told Mongabay-India that the company now has over 1,800 taxis and will expand its fleet up to 5,000 cars over the next few years. Growing consumer awareness is helping the electric vehicle-based service expand its business in the city.

Likewise, food and grocery delivery service providers like Zomato, Swiggy, Zepto, BlinkIt and others are transitioning to tethered electric scooters (scooters used for their internal work) for last-mile deliveries. (the last leg of the delivery journey to the customer’s doorstep). ). Most of them have their own charging stations on campus to run their business without depending on public or private charging stations.

The Delhi government on July 5 also introduced the draft Delhi Motor Vehicle Aggregators Policy to regulate vehicle aggregators engaged in passenger transportation, including delivery partners. As part of the policy, aggregators have been asked to gradually switch to electric mobility; otherwise they could be penalized.

According to the policy, aggregators must ensure that all new registrations by 2030 will come from electric vehicles. There are also electrification targets for 2023 for different categories of aggregators, identified in the policy.

As electric vehicles of all kinds become popular, charging infrastructure has yet to follow. While commercial and private four-wheelers and two-wheelers have set up charging facilities at their office or home, e-rickshaws and e-carts are however struggling to meet their charging needs. as they are highly dependent on parking. cum-charging stations where they shell out up to Rs. 3000-Rs. 4000 per month to recharge their vehicles.

Pawan Kumar, a manual rickshaw puller in Jagatpuri in Delhi, used his rickshaw to transport tiles for construction. However, due to the manual labor required to operate the rickshaw, his work was limited to a few hours a day. This year, he started driving an electric cargo three-wheeler offered by his employer. With this transition, he earns more, but still remains dependent on private charging and parking stations to charge the vehicle. “Switching from manual rickshaw to electric transporter has helped me earn up to Rs. 15,000 per month and also devote more time to my work as it is not very labor intensive now. I used to earn about Rs. 10,000. I transport the tiles from godowns to client sites.As many e-rickshaw drivers don’t have a good power supply to charge their vehicles at home, we have to give it to the car parks-charging stations where they are charged at night. Majority of e-rickshaws and e-carts do the same. These charging stations cost around Rs. 3,000 per month,” he told Mongabay-India .

Ramesh Yadav, who operates an e-rickshaw at the IP Extension metro station in Delhi, said the cost of charging at these centers is on top of other monthly maintenance costs for these vehicles and said that if the government could offer a good number of low-cost public charging stations, it could help rickshaw drivers like him reduce their input costs and increase their income.

“In Delhi, if you opt for a charging station, most of them are private where charges range from Rs. 10 per unit to Rs. 50 per unit depending on electricity supply and charging pace . If the government could consider expanding low-cost public charging stations, it could help many rickshaw drivers reduce their monthly charging costs,” he said.

Another electric rickshaw driver, Ramanath Prasad, said even the current number of charging stations in Delhi was not enough. In addition, many private charging stations have been designed specifically for four-wheelers.

Due to the cost of charging electric rickshaws, electricity theft and unauthorized use of electricity to charge these rickshaws is becoming commonplace in Delhi, resulting in losses for electricity supply companies (discom). According to government estimates, the unauthorized loading of electric rickshaws in Delhi has resulted in a loss of around Rs. 150 crore per year for nightclubs. Electric rickshaws use about 7 to 10 units of electricity to fully charge their vehicles, but due to the lack of adequate and cost-effective public charging stations, they pay around Rs. 100 rupees. 150 per day at most unregulated charging stations. On the other hand, the Delhi Electricity Regulatory Commission (DERC) tariff for separate household EV chargers stands at Rs 4.5 per unit, one of the lowest in the country. This also comes with one-time financial support from the Delhi government, but very few e-richshaw, e-auto and e-porter drivers take advantage of it due to lack of awareness and the lack of parking areas in their residential areas.

There is however hope in the near future as the Delhi government has recently started work on 14 new public charging stations on cluster basis where public charging facilities will be available for as little as Rs. 2 per unit against existing higher rates. While work on 14 stations has reportedly begun, a total of 100 such stations are expected to see the light of day by September this year. According to government statistics, Delhi currently has a total of 573 charging stations (private and government) with 812 charging points and 318 battery swapping stations.

Electric public transport is also being developed in Delhi. The Delhi Metro Rail Corporation (DMRC), after observing low interest in feeder bus services, has decided to launch 50 e-rickshaws as feeder services for last mile connectivity in the first phase of this effort. aimed at stimulating the use of public transport.

Spurthi Ravuri, a senior associate at the Center for Science, Technology and Policy Study (CSTEP), said more attention needs to be paid to public transport to tackle pollution in Delhi. She said: “Since notification of the EV policy in 2020, the state has seen an increase of over 100% in EV sales (from approximately 12,000 registrations in 2020 to approximately 25,000 in 2021 ). The state recorded about eight percent of total electric vehicle sales last fiscal year. The implementation of NITI Aayog’s battery swapping policy will attract more commuters to opt for electric vehicles.

She also added: “Achieving the 25% sales target by 2030 would help Delhi avoid around 5 metric tons of carbon dioxide emissions. Current congestion in Delhi is 48% i.e. say that it takes 48% longer to get around during peak congested conditions compared to uncongested conditions To address these issues, the focus should be on switching to electric public transport.

In terms of the electrification of Delhi’s public buses for example, the pace is slow – the city currently only has a total of 150 electric buses operating on the roads. The Delhi Transport Corporation (DTC) has planned to prepare 1,800 electric buses by the end of 2023, including 1,500 electric buses, under the central government’s Grand Challenge Scheme.

Delhi Transport Commissioner Ashish Kundra recently announced that the government will provide a 50% subsidy to female drivers who undergo training in electric vehicle driving at government-run training centers, while the Delhi government has also planned to ensure that 75% of their fleet of 5,500 government buses are electric vehicles by 2025.

When approached by Mongabay-India, the DTC and the Delhi Department of Transport did not respond to questions about the pace of introduction of electric vehicles into public transport in Delhi or the charging infrastructure. Emails sent to senior departmental officials also did not elicit a response.