The Chinese company Xiaomi offers an impressive range of affordable products, ranging from consumer electronics to sofas. They are also no stranger to personal electric vehicles, having produced a very popular electric bicycle as well as an equally popular electric scooter.

And now they’re doubling down on affordability even more with their new e-bike, the 1,699 yuan ($261) Himo e-bike.

Himo is an impressive, if not a bit small, e-bike.

Instead of following the standard design of the cheapest e-bikes coming out of China, which use off-the-shelf e-bike components bolted to any free space in the frame, Xiaomi designed Himo from the ground up as an electric bike.

The electronics, including battery and controller, are housed in a IP54 waterproof central case, which not only elegantly hides the less than attractive e-bike bits, but also allows the e-bike to be driven in the rain.

For such a small e-bike, Himo includes a full LCD display on the handlebars that shows speed, distance, motor assist level and battery charge status.

Himo comes standard with a headlight and taillight powered by the main battery, meaning you never have to worry about replacing those pesky little batteries in your lights. And as another cool feature usually only found on high-end e-bikes, the taillight even communicates with the brake lever to function as a brake light.

Cables and wiring are also integrated directly into the frame for a cleaner look – another feature rarely found on budget e-bikes.

The frame is also a custom job, made from aluminum alloy and built around the mid box, which leaves room for a handle to carry the small e-bike with you. 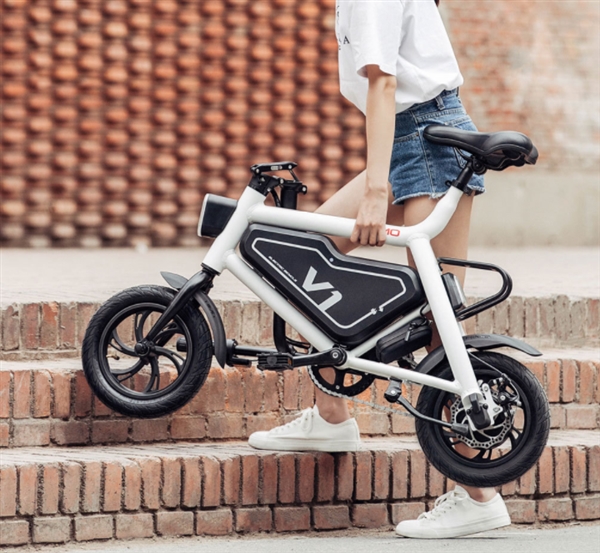 A 250W brushless gear DC motor is housed in the rear wheel, and due to the small 12-inch wheels, the tiny motor takes up a surprising amount of the rear wheel. Speaking of the wheels, they’re cast and spokeless, meaning you’ll never have to worry about breaking a spoke or straightening a wheel. Don’t expect the small wheels to smooth out potholes for you. 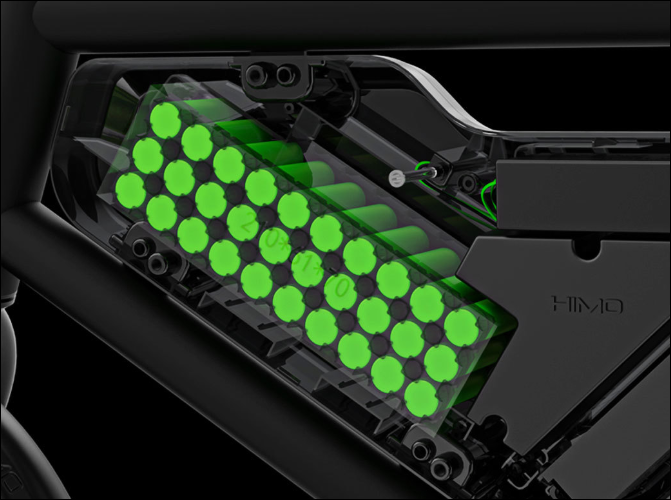 Xiaomi rates Himo as capable of 50 km (31 mi) on a charge, although this is likely in the lowest assist setting. Switching to a mode with higher motor assist will definitely reduce the range.

Himo claims a fairly long charge rate of 6.5 hours, which means it probably comes with a 1A or

Ready to grab your very own Himo? You can grab one quickly if you’re in China, where it’s currently selling on Xiaomi’s own crowdfunding platform and is set to start shipping on July 30.

For the rest of us, we’ll have to wait a bit longer to get Himo out of China. But in such cases, China-direct retail sites like Gearbest and AliExpress usually start selling Chinese market products a few months after release, sometimes earlier.

And don’t be surprised to see Himo pop up on Amazon in the US a few months later, where you can already buy Xiaomi’s other super affordable and popular e-bike and e-scooter.

This is a nice little e-bike that is more for light urban use than longer commutes or recreation. But for something that can get you traveling around town while hiding under your desk or in the corner of your desk, Xiaomi seems to have done pretty well.

Both the 6.5 hour charge rate and the low power charger are a little disappointing, but I guess sacrifices have to be made to bring the price down to as low as ~$261 (although that price could be higher in the United States partly because of proposed tariffs for electric bicycles by the Trump administration). And I’d definitely rather sacrifices made on the power of the included charger than on the quality of the bike’s components. I can wait a bit longer to recharge, but coming home because the bike has collapsed isn’t ideal.

For those who want a more serious machine, you can probably keep walking. But for those looking for an inexpensive way to hop the bus or Uber, you can’t beat a mini e-bike like this in terms of convenience and affordability!