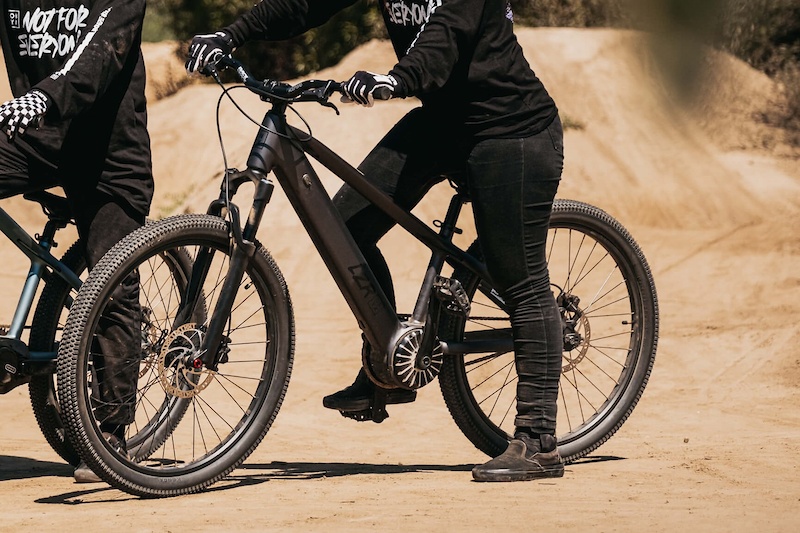 I can honestly say that I never thought my dirt jumper needed an electric motor. Hell, he barely needs a chain. Onyx, a California company that started making electric mopeds inspired by cafe racers, thinks differently. They launched two motorized dirt jumpers which they call “hyper off-road killers”. The hyperbole runs very thick with this pitch – the bikes are also supposed to allow riders to “hit the biggest jumps in the park and tame the toughest urban obstacles without breaking a sweat”. However, sweating will likely occur if you have to lift the bike over a fence to get into a spot or to escape an over-eager security guard – the bikes weigh around 40 pounds.

The bikes even have SWAT, but it’s not for storing tools inside the frame à la Specialized. Instead, this acronym stands for Smooth Weld Additive Technology – Onyx uses an additive welding process that gives the aluminum frame an extra smooth look, without the visible beads around the seams that come from traditional welding.

There are two different models, one with a 500Wh battery and an Onyx-labeled mid-drive motor that has a pre-sale price of $1,999, and the other, the LZR Pro, which has a 900Wh battery. and a Bafang motor which is priced at 2,799 USD.

It’s hard to argue against the simplicity of a dirt jumper. Take a single-speed hardtail, add 26-inch wheels, a brake, maybe a suspension fork to help with a failed landing, and you have a recipe for endless good times on the trail. pump, dirt jumps or the skate park. The maintenance required is minimal and you don’t have to worry about upgrade anxiety every time a new 13-speed transmission or fancy damper is released.

Arguing against the need for a motorized dirt jumper? It’s easy. There are already far too many monowheels trying to make their way down the pump tracks – the last thing the world needs is another motorized contraption weaving around what should be an area accessible to cyclists of all ages. levels. Same goes for dirt jumps – I can already imagine the case marks when little Billy realizes it’s a lot harder to get enough air to get to landing on a bike 40 pounds, motor or not.

What about the concept that it could be a kind of adventure commuter, a bike with which you can use urban features on the way to work? Unless your commute is only a block or two away, or you really like pedaling upright, I don’t really see this as a viable option.

Who knows, though, I’ve been wrong many times before. Maybe there’s a whole bunch of retired riders out there who dreamed of the day when they wouldn’t have to pedal a hundred yards to get back to the top of a jump line.