Yet after thieves take $100,000 worth of bikes, store owner says he remains 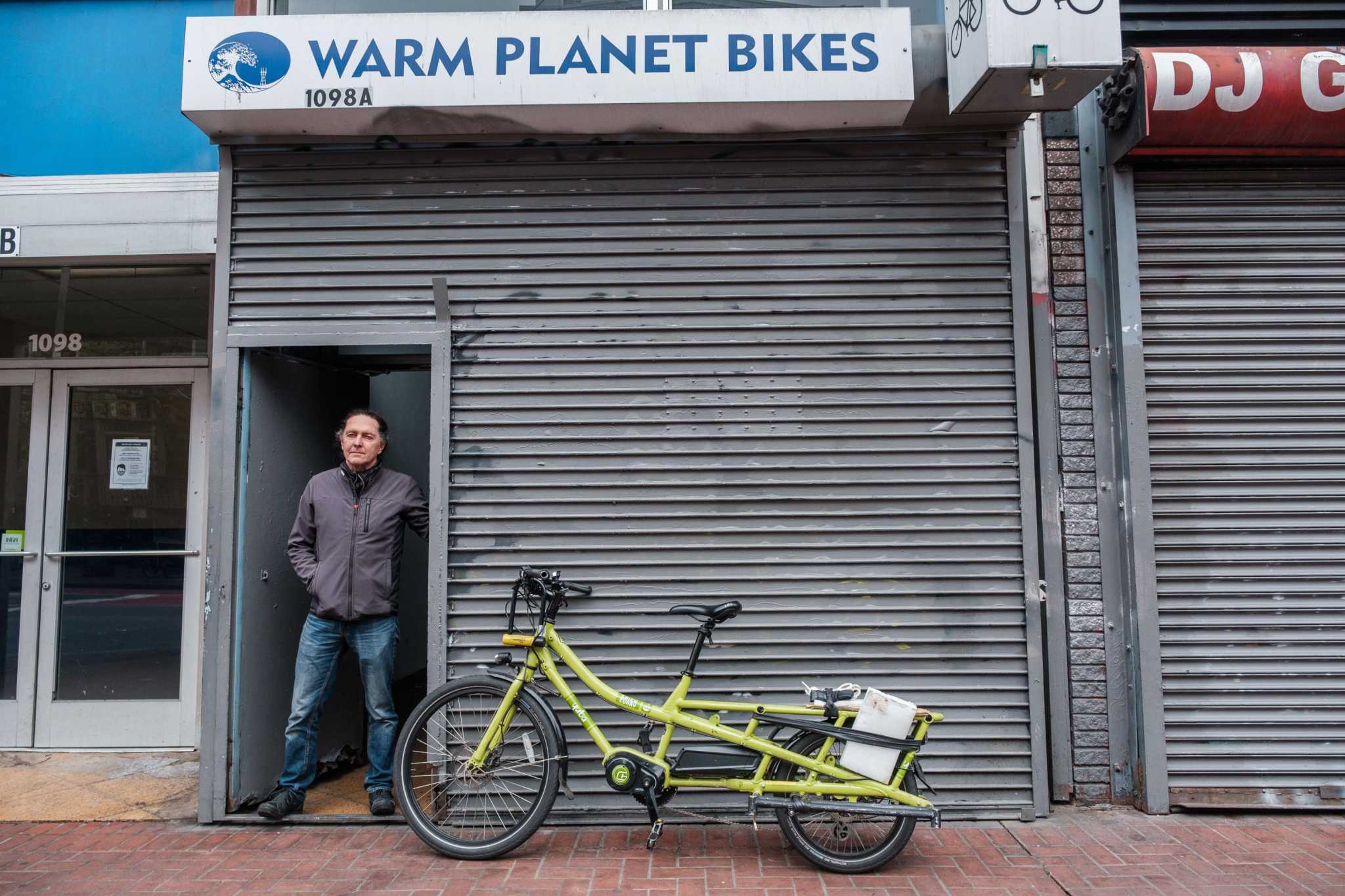 Yet after thieves take $100,000 worth of bikes, store owner says he remains

After nearly a decade of operating a retail business on the 1000 block of Market Street, Warm Planet Bikes owner Kash is not a guy who blushes easily.

Kash, who goes by the same name, has seen it all, heard it all, and smelled it all: the relentless traffic of fentanyl, the daily overdoses, the scams, the shouting, the stench, the pop-up markets for hot stuff. Recently, an encampment popped up next to his store and a guy was barbecuing and selling stolen meat.

Yet nothing prepared him for the early morning of last August when he received a phone call from a construction worker who had passed the long, narrow bike shop at 1098A Market St. and noticed that something was wrong. The sign on the door said “Open by Appointment” and had Kash’s phone number on it, but the door was wide open and it looked like the place had been ransacked.

Kash hopped on his bike and pedaled to the store. By the time he arrived the police were there, but it was too late. The store had been emptied of its inventory — $100,000 worth of e-bikes, folding bikes, cargo bikes, tools, wheels, pumps, tires.

“They even took the trash cans and the recycling bins,” he said.

The break-in took place about three months before the armed robbery late last year at Louis Vuitton’s Union Square store made national headlines. The value of the novelty bags taken from Louis Vuitton was roughly equivalent to the one stolen from Warm Planet. Yet Kash received nothing from the press or the additional police presence that descended on the luxury shops of Union Square.

For Kash, a veteran left-wing activist who co-founded the San Francisco Bicycle Coalition, it was heartbreaking. It’s not just that the thieves got away with its inventory of Urban Arrow and Bullitt cargo bikes and Tern folding bikes, it’s that the burglars were followed by waves of opportunists who made use of everything that their predecessors had left behind.

A beater bike was recovered from a homeless camp and another from a hotel residence. Nothing else appeared.

“In a decent community, someone would see the door open in the middle of the night and say, ‘God, that doesn’t look good’ and call the police,” Kash said. “Instead everyone and his brother came here and took what they could get.”

The break-in came after a three-year period in which the majority of retailers and restaurants in the Market Street center closed shop. Huckleberry Bicycles, considered a symbol of Market Street’s revival when it opened in 2011, has moved to Levi’s Plaza on the city’s northern waterfront. Alongside Warm Planet Bikes, the World of Stereo, which supplied turntables and speakers to DJs, moved deeper into the southern market. Homeskillet Restaurant, Popsons Burgers, Equator Coffee, Pentacle Coffee, a CVS Pharmacy and several upscale bistros have joined the exodus.

But, says Kash, despite the migration and crime, he is determined to stay in the neighborhood and continue to help as many people as possible trade in their cars for more sustainable modes of transportation.

“We have a clientele of great people who may not have a lot of money,” he said. “These are the people I intended to serve when I left activism to work as a bike shop.”

Kash arrived in San Francisco in 1985 and worked as a bicycle courier. For years, he ran the Bike Coalition’s valet service for Giants games and music festivals. Eventually he opened a small store at the Caltrain station on Fourth Street where he made repairs and sold folding bikes.

It’s no coincidence that Kash moved to Market Street, which before the pandemic was one of the busiest biking thoroughfares in the United States. The street was “a traffic sewer” when Kash first came to town from New York and it took decades of advocacy and organizing to get bike lanes added and much of the street is closed to private cars. He is proud of what Market Street has become and says it will become even more bike-friendly when construction begins on the scaled-down redesign of ‘Better Market Street’.

“We won, and the day it happened, I stood in my doorway and watched the bikes go by on a clear, quiet street,” he said.

Still, Kash is disappointed with much of what’s going on in the city — the crime, the cost of housing, the divisive politics. He says there’s a tendency among fellow progressives in San Francisco to “dig in and defend” antisocial behavior just because right-wing commentators “enjoy it.”

“It’s been a relentless and grueling experience watching this neighborhood crumble and good people with no money move out and leave the crooks and criminals behind,” he said. “We want to be good and help people get lucky. We naively think the way to do it is to be kind and take advantage of it. Being a caring person doesn’t mean being pushy in the face of bad behavior.

On a recent Tuesday, Warm Planet customer Adam Keats stopped by to pick up an Xtera cycle he was having repaired. Keats has been buying bikes from Kash for almost a decade.

“It’s not a business, it’s a couple of guys with a bike shop,” he said.

Keats said he was saddened by the theft but not surprised. He was in the store about a month ago when a guy walked in and looked like he was about to “get a hold and run”. He refused to leave and it took both Keats and Kash to get him out onto the sidewalk. But shortly after this incident, a resident of one of the new apartment buildings that opened on Market Street walked into the store asking, “Hey, what’s this place?”

Kash could use the business. Even seven months after being robbed, Kash has been unable to replace some of the inventory due to supply shortages. It’s still open by appointment only, which reduces the number of troublemakers wandering around.

“Good people make appointments. I wish it wasn’t like this, but that’s how it’s going to have to be for a while,” he said. “The hardest part is people don’t know I’m open because we keep the door closed. I have to keep reminding people that it may seem like we’re closed, but we’re here.

After 35 years of struggling to make San Francisco as bike-friendly as possible, he’s going nowhere.