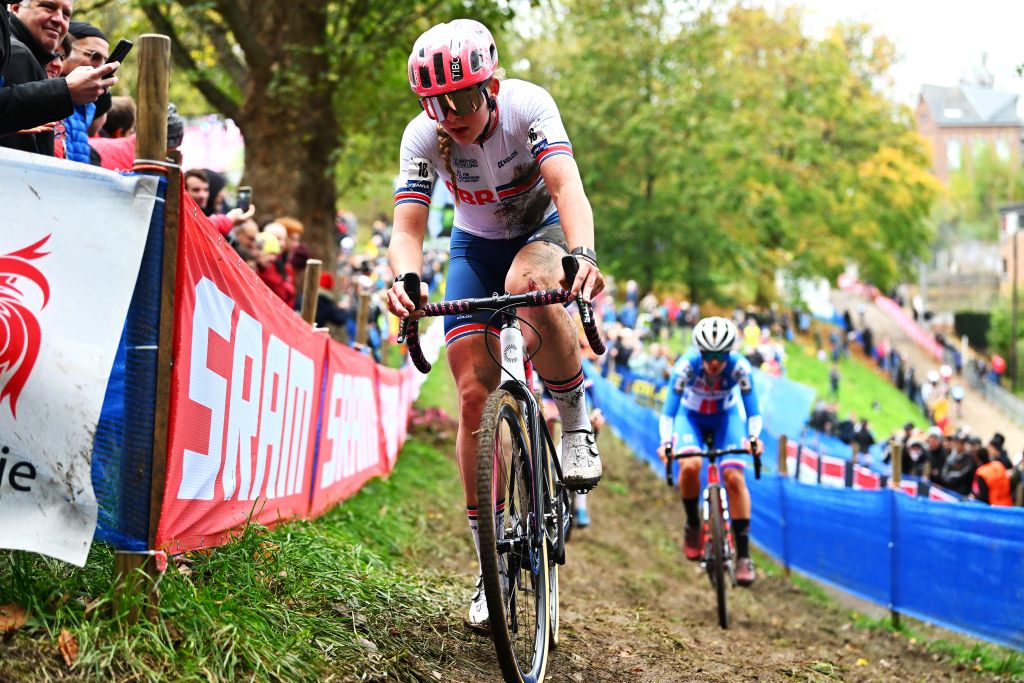 Zoe Backstedt hopes a season of road racing at WorldTour level with EF Education-TIBCO-SVB will help her improve as a cyclo-cross racer, with the talented teenager aiming to combine the two disciplines in the years to come. come.

The 18-year-old won world titles in the road race, time trial and cyclo-cross as a junior but has now made the leap to the under-23 ranks. Despite heavy crashes at the start of the European Under-23 Cyclo-Cross Championships on Sunday, Backstedt battled back to finish fifth, 1:53 behind clear winner Puck Pieterse.

After signing with EF Education-TIBCO-SVB for two years, the teenager hopes her first full season as a professional road racer will also help her improve her cyclo-cross form.

“I would like to (combine cyclo-cross and road),” Backstedt said.

“I really like cyclo-cross and it’s really good for my technical skills and it shows when I’m racing on the road.”

“When I race on the road, you see the difference in endurance when you go back to cyclo-cross. When you do cyclo-cross races longer than an hour, you have the endurance to do those 10 minutes extra at full throttle.

“It doesn’t seem to make too much of a difference, but it can be.”

Backstedt hopes to “find himself” in his first year with EF Education and has his eye on the Spring Classics by following in the footsteps of his father Magnus Backstedt who won Paris Roubaix 18 years ago.

“My goal is just to help the team and try to get results,” Backstedt explained.

“I am also developing as a driver. I don’t see myself looking for wins yet. This will be a pretty big step from junior to the WorldTour ranks.

“I just find myself and try to finish the 140, 160 kilometer days. I can be myself, I can ride how I like and how the team needs help. I don’t see myself being the best on mountain days but stick with me in Roubaix or the Tour of Flanders, that’s where in my head I think I’ll do the best.

“Anything can happen during the road season and I just have to do one race at a time.”

Backstedt finished second in the Coupe de France cyclo-cross event at Nommay last month, beaten only by teammate Clara Honsinger. She hopes to break into the top 10 at an elite round of the World Cup soon and is set to take on Anna Kay for the British national cyclo-cross title in January.

“I just want to try and get back in the pack and get some top 10s at World Cups or something,” Backstedt added.

“It will mean a lot to me if I can race in Nationals kit next year.”

Backstedt took part this weekend in her first major championships as an under-23 rider on a treacherous Namur course. After getting off to a perfect start, the British driver crashed heavily down a muddy embankment landing on cobblestones below.

The crash also resulted in a double puncture and she lost 36 seconds to the early leaders before changing bikes.

Backstedt pulled back to fight Marie Schreiber for fourth place but faded on the final lap to finish 26 seconds from the medals.

“I’m happy with that, it was an interesting race but fifth is pretty good,” added Backstedt.

“I just watched the fall back as I froze my knee, it was pretty spectacular. The moment I was falling, I knew it wasn’t going to be good. I had a double puncture and my levers twisted. The punctures were ok for the climb, they are just cobblestones so you climb them as hard as you can.

“Yes it will ruin the equipment a bit but it’s the European Championships so you just have to ride it and I wasn’t too far from the pits.

“I felt really good on the bike. I was catching a lot of people on the climb which was actually my highlight of the day for some reason. It’s usually never my forte, but I felt like I could hit really hard.

“I just used that to my advantage and played it safe on that run.”